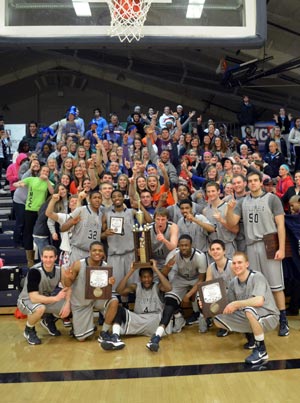 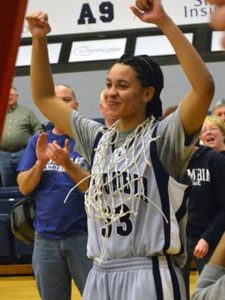 The 15th-ranked Lady Cougar basketball team avenged last season’s tournament championship loss to William Woods (Mo.) University with a 91-83 victory over the Owls on March 4 in the American Midwest Conference (AMC) tournament championship game. Columbia, the tournament’s top seed, improves to 27-6 overall on the season with the win and receives an automatic bid to next week’s NAIA National Championships in Frankfort, Ky.

Following the contest, members of the AMC All-Conference squads were recognized. Heather English was honored as the league’s most valuable player and named to the ten-member first team for the second straight year. Senior Lily Abreu also pulled in first team accolades. Senior Julie Teeple was an honorable mention selection.

Read more about the championship game. 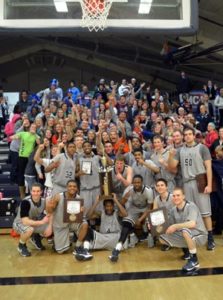 The No. 1 ranked Cougar men’s basketball team improved to 33-0 on Tuesday evening with a 77-63 victory over No. 2 seed Park (Mo.) University in the AMC tournament championship game. The second consecutive AMC title establishes a new school record for victories in a single season and also gives the Cougars a bid to the NAIA National Championships.

Following the contest, members of the AMC All-Conference squads were recognized. Jordan Dressler was honored as the league’s most valuable player and named to the 10-member first team for the second straight year. Juniors Derrick Dilworth and Devin Griffin also pulled in first team accolades. Dilworth also earned the league’s Newcomer of the Year award. Senior Marquette Murrell was an honorable mention selection. For the third year in a row, head coach Bob Burchard took AMC Coach of the Year honors. Burchard, who was inducted into the NAIA Hall of Fame last year, will also be inducted into the Missouri Sports Hall of Fame on April 14.

Read more about the championship game.

The NAIA National Tournament seeds and pairings – for both the men’s and women’s teams – will be announced on Wednesday, March 6 at 7 p.m. Watch the release live in the Courts of Southwell Complex starting at 6:30 p.m.