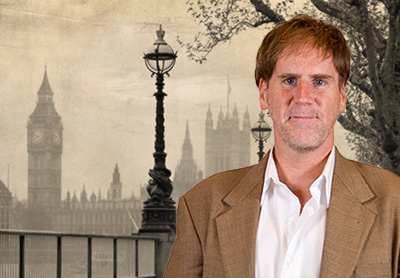 On a balmy summer day, you’ll probably find Dr. David Karr in his second floor St. Clair Hall office, sitting at his desk behind an impressive pile of historical records and dusty books. With overlapping interests in history and English literature, there may be no such thing as too many books, especially if you’re setting out to write the first biography about someone.

Well, nearly the first biography, anyway. When Thomas Holcroft decided to write his autobiography from his deathbed in 1809, he managed to record his life only up to the age of 12. His friend William Hazlitt, the great Romantic essayist, picked up the job from there, cobbling together the only published account of Holcroft’s life as an influential 18th century British political radical and playwright.

“This guy deserves a biography,” Karr says. “There’s only been one published that is a dedicated biography, but there’s not been a real scholarly biography written of him since 1925, and I think he’s worth one. The information currently available on him is badly outdated. He’s a pretty central figure in the 1790s and is one of the most well-known political spokespeople for desires to reform Britain’s political system.”

Karr, a recently tenured history professor and one of six Columbia College faculty to receive a summer research grant this year, plans to use his funds to continue his research on Holcroft’s life. Karr began researching Holcroft while pursuing his Ph.D. in modern European history at Vanderbilt in 2001. His curiosity was piqued when he learned that the British government had charged Holcroft with high treason—a hefty crime for a playwright at a time when the government heavily censored the stage. Holcroft was inspired by the ideals of the French Revolution and became a proponent to reform Britain’s political system, a sentiment the government perceived as a threat. The British government later dropped the charges against Holcroft, but his place in history as a rebel rouser was cast.

“He was very publically visible. He was producing some very popular plays as well as some novels. The concern by the government was that he had the ability to speak to the public in ways that others didn’t,” Karr says of Holcroft. “As a playwright and novelist, he could circulate his ideas effectively in those mediums. I used Holcroft’s connection to theatre and politics as a lens through which to view the larger theatricality of this period of political contest.”

And this period of political contest was not to be taken lightly. It pitted the working class against the aristocracy and set into motion political movements whose actions can still be felt today. Holcroft, who kept company with well-known historical figures such as Thomas Paine, Mary Wollstonecraft and William Godwin, rallied against the aristocracy, believing its pageantry corrupted society and seduced the masses into being loyal to the monarch. Instead, he wanted to see a society governed more democratically by relationships of pure merit.

This rich era of Western history provides Karr with many potential avenues for future research, including how successors would come to commemorate Holcroft’s work and regard him as a path-paver for future generations of change seekers. Karr, aided by the summer research grant, plans to write a few chapters of Holcroft’s biography and then begin seeking out publishers. He also is set to publish an article in the British journal Historical Research later this year.

This is the first year Karr has applied for a summer research grant, for which he had to write a proposal demonstrating how his research will contribute to scholarship. Academic Affairs funds the grant and recipients are determined by a professional development committee.