The power of linguistics 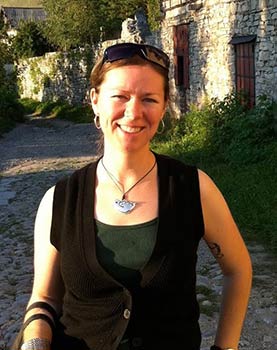 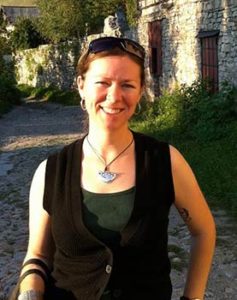 Dr. Miranda E. Wilkerson, assistant professor of English for Speakers of Others (ESOL) and coordinator of Columbia College’s ESOL program.

Imagine living in a small Wisconsin town in 1910. You rise early every day to see that your children are off to school before heading into town to begin your day as a merchant, cabinet maker or stonemason. You make a comfortable living for you and the three generations of family living under your roof, which was typical of the time. You are an active, productive member of your church and community, know your neighbors, feel a sense of civic duty and ultimately, you are proud to be an American. Life is good.

Now, imagine that you do not speak English.

According to Dr. Miranda E. Wilkerson, assistant professor of English for Speakers of Other Languages (ESOL) at Columbia College’s main campus, you are much like the quarter of adult residents in this southeastern Wisconsin town of Hustisford who spoke only German, even though more than 75 percent of these lived in the U.S. for at least 30 years. Why? Because the culture of the time didn’t demand that they do.

“I found an interest in how people speak, how people identify with certain things, how the mind works.”

“I found an interest in how people speak, how people identify with certain things, how the mind works,” Wilkerson says of what inspired her to study linguistics. With her Ph.D. in applied German linguistics from the University of Wisconsin-Madison and extensive training and certification in teaching English to speakers of other languages, she serves as the college’s ESOL coordinator. This year she received one of six faculty summer research grants, which allowed her to dig deeper into a subject that fascinates her: how cultural stereotypes espouse language acquisition with the idea of good citizenship.

This German translation of the ‘Star-Spangled Banner’ appeared on the cover a 1917 edition of Die Hausfrau (The Housewife) magazine, an image Wilkerson used in her research to demonstrate the patriotism of German-Americans of the time. The image is from the digital collections of the Max Kade Institute at the University of Wisconsin-Madison.

“German-Americans were profoundly patriotic and inspired by American culture, and saw themselves as good Americans. They did not see speaking German as a barrier to being good Americans.” 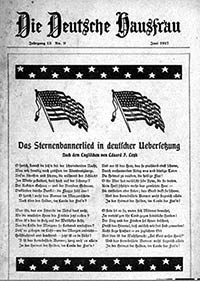 Wilkerson has been researching how 19th and early 20th-century German immigrants learned English and how language acquisition affected their integration into American society. The research, done collaboratively with Joseph Salmons at the University of Wisconsin-Madison, shows that American-born second- and third-generation German immigrants were slow to learn English because they were not marginalized socially, geographically or economically, or considered by their Anglo-American counterparts to be poor citizens for not speaking English. On the contrary—they were able to lead full, productive, successful lives without it.
“German-Americans were profoundly patriotic and inspired by American culture, and saw themselves as good Americans,” says Wilkerson of her research. “They did not see speaking German as a barrier to being good Americans.”

Fast forward one-hundred years, however, and it is safe to say that public opinion has changed greatly. Wilkerson’s research is timely and relevant against today’s backdrop of fervid U.S. immigration policy debates, which include dialogue about making English the official U.S. language and a citizenship requirement. Supporters of the modern English-only movement believe American culture is threatened when English is not the primary language, which is the subject of an ABC News article published in June, in which Wilkerson’s research is highlighted.

The article compared Wilkerson and Salmons’ research to a 2012 Pew study, which examined how quickly today’s Latino immigrants are learning English. The Pew study found that 92% of American-born second-generation Latinos speak English “very well,” and that third generation Latinos are almost completely English-monolingual or bilingual, agreeing with Wilkerson and Salmons that today’s immigrants are actually acquiring English much faster.

“A lot of Latinos are immigrating today, and pockets of German immigrants one-hundred years ago present many similarities,” Wilkerson says. “We can look at the current public discourse about immigrant groups, compare it to historical records and ask ‘do these views bear out from a historical viewpoint?’ They really don’t.”

“We can look at the current public discourse about immigrant groups, compare it to historical records and ask ‘do these views bear out from a historical viewpoint?’ They really don’t.”

To Wilkerson, this debunks the myth that the idea of being a good American is synonymous with speaking English. Her research on the demographics and social patterns under which English was first acquired in the U.S. is just part of a growing sector of linguistic research in this area. And the findings are pointing to how the truth found in American historical records should be kept well in mind as we move forward in shaping our heritage.