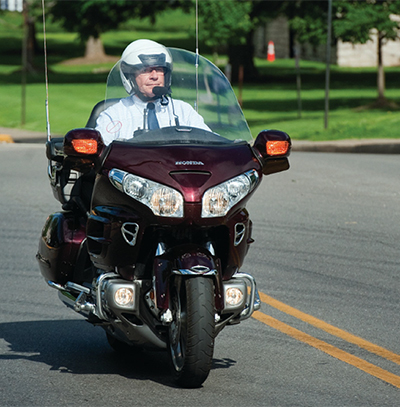 By Lorry Myers for Prime Magazine
Photos by L.G. Patterson 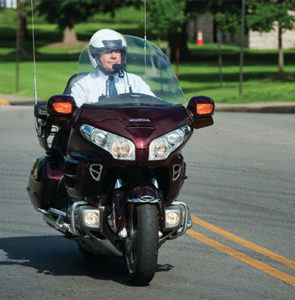 He remembers leaving home, his friends leading the way on their motorcycle. He was riding his beloved Goldwing, with his wife, Tempe, perched behind him. They had taken that road many times, talking to one another through the headsets in their helmets. Since that day, he has searched his memory but can’t find the words exchanged on that trip.

He does remember their lunch at a little restaurant and their drive through Bagnell Dam.

But not the truck that pulled out in front of him.
That he doesn’t remember.

Dr. David Humphrey’s road to Columbia has been marked by many mileposts. The 58-year-old started his new journey as director of the Columbia College Evening Campus in January
2013. He came to the job with a strong résumé detailing his many administrative achievements and the places his profession has taken him. What isn’t spelled out on paper is his emotional bond to nontraditional college students and his awareness of the roadblocks that can obstruct their paths.

He’s had a few roadblocks of his own.

Humphrey grew up in Centralia, the youngest of four children. Two of his siblings were already out of the house and on their own when he arrived. He was the baby of his family and by the time he was a teenager, his parents were retired. College was a given, both in its certainty and in his parents taking care of the expense.

In high school, Humphrey was known as a student who always did the right thing. He was the president of his senior class but had no idea what he wanted to be. While others declared they would study to be lawyers or teachers, Humphrey just figured he would figure it out. He followed friends to what is now Truman State University and gradually migrated to a business degree because it felt like the right thing to do. His senior year, one of his professors stopped him and asked what his plans were for the future. Humphrey frankly told him that he didn’t have any. So the professor suggested he apply for a master’s intern position, and Humphrey did.

It just felt like the right thing to do.

Humphrey believes he matured in those few years he was earning his master’s degree. Once again, close to graduation, a professor approached him to ask about his plans. There was an opening at Westminster College in Fulton. Humphrey married his high school sweetheart and took the highway to Fulton to start his life. In the next years, he had two children, Olive and Spencer, and fatherhood along with his career kept him moving forward.

Humphrey quickly advanced at Westminster, from the director of financial aid to the dean of students and then to executive director of the Center for Leadership and Service.

Once more he was approached about the future and this time was convinced to pursue a doctorate degree. Humphrey knew it would take time and incredibly detailed work, but he jumped in with both feet and a whole heart.

It just felt like the right thing to do
Humphrey’s dissertation for his doctorate in higher and adult education at the University of Missouri was a role study of the diverse perspectives of the college world of financial aid. Humphrey’s research opened his eyes to the motivations and frustrations that often accompany the financial aid process.
Thinking about his parents and the opportunities they gave him, he was humbled by the struggles of the families whose college dreams hinged on the awarding of funding assistance.

That understanding was more valuable to Humphrey than the title of “doctor” before his name.
After his doctorate journey, Humphrey divorced, so the students in Westminster gave him a meaningful purpose. He remembered the teachers and professors that had found him at the crossroads of his life, and Humphrey sought out those students who needed a pat on the back or a reassuring word. The students affectionately called him “Dr. Dave,” and they knew that his door was always open to anyone who needed direction.
Humphrey eventually met and fell in love with a woman named Tempe, who, ironically, worked for the Missouri Department of Transportation, educating people on highway safety. Life was a new adventure for them, and in their seven years of marriage, a Goldwing motorcycle took them places they’d always wanted to go.
Until 2006, when that same Goldwing took them into the path of another vehicle at the Lake of the Ozarks. The highway patrol said Humphrey had less than one second to react to the truck that pulled in front of his motorcycle from a side road.
But Humphrey doesn’t remember any of that.

His memory comes back to him in pieces beginning two weeks after the accident. The first thing he could hold on to was the spoken words “Head Trauma Unit.” Hearing that, Humphrey slipped away, knowing that he should be remembering something.
Something life-changing.

He had nine broken bones, with one leg so damaged that doctors feared he would never walk without assistance. His spleen was also a concern, but more importantly, Humphrey sustained a severe head injury. His children were told to expect the worst, and for weeks he was in and out of consciousness. It was only after a complex surgery to set his bones and success in relieving the swelling of his brain that Humphrey found his way back and seemed to understand where he was. It was then that his brother and daughter came in and sat down on his bed.
They had something to tell him.

In the accident, Tempe was killed, and so was the elderly driver of the truck. Humphrey listened to his family’s carefully chosen words, and somewhere inside him he understood. But still he would ask about Tempe and when she would be back. A door would open, and he would look up, thinking it would be her. In the deepest part of him, Humphrey knew his wife was gone, but he couldn’t find his way through the medications to comprehend truly. He didn’t cry; he couldn’t mourn. The medicine and his recuperation kept him very detached from his feelings. There was speech therapy to learn to talk again and physical therapy to learn to walk again. Rehab took all he had.
It was a long road home.

From a walker, to a cane, to finally a man on his own two feet. The world was now a different place. Humphrey knew his old life and his old job were a part of the old him. He needed a change, a chance to put perspective on the life-altering roadblock he faced. He took a new job, one vastly different from a college campus. Humphrey worked as a collaboration trainer for the Missouri Association for Community Action, a statewide agency that educates individuals who are trying to improve their circumstances in life.

Dr. Dave could relate to that.

In this new career, Humphrey learned about being poor, about being dependent, about being underprivileged. He met remarkable people, broken people, people who believed they would never have a real chance in life. His job was to educate them about their choices, to provide them with the knowledge and services that could change their direction.

Humphrey learned more that year than he could ever write in a dissertation paper.

But he missed the college life — the students, the challenges and the optimism that a college campus offers.
It was time to go back, so Humphrey applied for a job with Columbia College as the assistant director of the Jefferson City campus. By then his limp was unnoticeable, his speech, steady. Columbia College was a good fit for Humphrey. The students brought a determination to their studies that he admired. When the Evening Campus director position in Columbia became available, Humphrey decided to give it a go.

This time, life took him down the highway to Columbia. As the director of the Columbia College Evening Campus, the first thing Dr. Dave did was drop the “doctor” title in front of his name. It’s not on his business cards or on his nameplate. In the adult world of education, Humphrey did not want his title to be a barrier in connecting with the students. His day starts early, and often he stays into the night, walking the halls and meeting those students who come to the Evening Campus.

They are not typical college students.

The Evening Campus student is characteristically older. They are usually juggling a job or a family with their studies and feel the impact and the cost of the classes they take. In some way or another, they have encountered life’s detours and have a fierce determination to stay the course.
Humphrey can relate to that.

Looking at him, Humphrey’s colleagues and students would never guess the fork in the road that got him where he is today. His walk is steady; his bright blue-gray eyes give no indication that he is a survivor of a serious brain injury. He comes to work each day and thrives in the atmosphere of energy and hope that is the essence of a college campus.

If he could offer any advice to his college students, Humphrey would tell them the journey of life is unpredictable and to enjoy the ride to the fullest. Travel light, take just what is important and leave all the heavy baggage behind. Move past anger, and embrace forgiveness — lessons he learned in the years following his accident.

“Life should be about your relationships — those who care about you and those that you care about,” Humphrey says. “Don’t be afraid of change or the critical decisions that bring it about. Take a chance, keep moving. Don’t stand still long enough for life to pass you by. Faith in something bigger than you is a good traveling companion. Sometimes in the dark est of nights, it is that faith that will keep you company. Love yourself, love somebody, and reach out a hand when you have nothing else to give.”

He’s been offered a few of those hands himself.

Humphrey realizes this advice is full of clichés, but there’s a humbling personal truth there, too. He is proof that the time we have is limited: A single second can take so much away.

A single second can change everything.

Recently, Humphrey took up riding a motorcycle again; it felt like the right thing to do. A new love sits behind him on a new Goldwing, with her arms wrapped around his waist and her voice in his ear. He still has a sinking feeling when he encounters a vehicle at an intersection, but he is not caving in to fear or avoiding something that gives him pleasure because of what he might have taken away.

Humphrey is one traveler who knows roadblocks don’t have to end the journey.