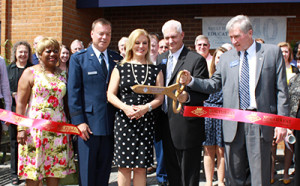 Columbia College-St. Louis was the first, and is the longest-standing Nationwide Campus. Its very presence is indicative of the college commitment to serve the underserved – namely adult learners – as they strive to better their lives through education.

“Simply put, the college is serious about education and the future,” Dr. Bob Steffes, director of the St. Louis campus, said. “Today, our college demonstrates that seriousness as well as our commitment to continuously enhancing our mission of teaching and learning by the rededication of this building.”

On Aug. 29, Columbia College celebrated 40 years educating adult learners at its first Nationwide Campus in St. Louis, whose renovated campus was rededicated at the event.

The Adult Higher Education division formed with the creation of the St. Louis campus in 1973 after a request from the United States Army to provide education for service members in the area. In 2000, the military indicated the college needed to provide enough online course work for military members to earn residency status. So in October 2000, the college ventured into online education.

“It is clear that the move to serve adult learners would not have happened had it not been for the critical nudging of the U.S. military,” said Dr. Terry Smith, Columbia College interim president.

Brig. Gen. Dave Newman of the Missouri Air National Guard said Columbia College was destined to have a partnership with the military. The principles of excellence that Columbia College has established work well for military service members, he said.

Smith gave sincere thanks to the military for “assisting in not only the forming of the division and the St. Louis campus 40 years ago, but also propelling us into 21st century education. Thank you for changing the trajectory of our institution.”

As the first Nationwide Campus, St. Louis represents the mission of the entire college. Kim Dondaville, a St. Louis adjunct faculty member, spoke about how consistently impressed she is with her students, many of whom have full-time jobs and families. She said she wants students to go for greater.

After comments from the distinguished guests, Brian Goldman, who was representing the Northwest Chamber of Commerce, presided over the ribbon cutting. Columbia College has been a member for 17 years.

The St. Louis building recently underwent a major renovation that included the installation of a new elevator, updated bathrooms, HVAC throughout and redesigned office space.

“The renovation of this facility speaks to the seriousness Columbia College holds for its educational mission by creating a superb environment for teaching and learning here in St. Louis,” Smith said.

Not only does the renovation speak to that, but the network of 35 Nationwide Campuses is a testament to educational commitment as well.

Susan Solovic ’80, who serves as a member of the Columbia College Board of Trustees and graduated from the college just seven years after the establishment of the AHE Division, said education is the most valuable asset a person can have, and she recognized the college as the path to everything she’s done in her career.

Forty years ago even the most visionary member of the Columbia College family likely did not imagine that the future Columbia College would reach out to more than 30,000 students each year, even in far-reaching places like Cuba. But thanks to the efforts of Columbia College’s Division of Adult Higher Education (AHE), the Columbia College-Guantanamo Bay campus is a reality, along with 34 other Nationwide Campuses that can be found across the country in 13 states and on 18 military bases. The division, including the Evening and Online campuses, wasn’t always so large or far-reaching, however. It started small but remained diligent and committed to its mission. This August the college celebrates its roots and 40 years of sharing Columbia College’s mission and values with students, alumni and friends around the world.

It all started during the 1972-73 school year, when Columbia College received a request from a United States Army Recruiting Command Lieutenant Colonel, who was looking for a college to provide evening courses to service members in the St. Louis area. The college, recognizing a national shift toward meeting the educational needs of the nontraditional military student, formed the Extended Studies Division (ESD), and James O. Preston, a Northeast Missouri State University psychology professor, was appointed as the first dean. After 122 years of tradition and convention operating as a single campus, Columbia College began offering coursework outside Columbia in St. Louis in 1973. Its first students were army recruiters assigned to the St. Louis Troop Support Command , and the curriculum offered primarily business and sales courses.

In the decade to follow, ESD pioneered its way through the obstacles of establishing campuses at locations and military bases throughout the country — something few schools had yet to master. ESD established the Evening Campus in Columbia in 1975, and by 1982 ESD had set up 17 campuses around the country serving about 1,300 students. In 2000 ESD made another pivotal move when it joined the digital era by creating the Online Campus. In 2005 ESD was renamed the Division of Adult Higher Education. The central administration for the division operates out of St. Clair Hall at the main campus.

“Through our Nationwide, Evening and Online campuses, we’ve grown bigger but at the same time we’ve grown more cohesive,” says Mike Randerson, vice president for AHE. “We have maintained our commitments to increasing access to education, continuing our arts and sciences tradition and providing an overall quality education.” Randerson, a retired U.S. Air Force colonel, has led the division since April 1996.

That true partnership has allowed Columbia College not only to sustain but also to grow its commitment to educating the nontraditional adult learner, which includes working civilians as well as military service members and veterans. What started as degree programs in business and individual studies has blossomed into a number of in-seat associate, bachelor’s, master’s and certificate programs offered at each location, and 27 degrees online. The division continues to expand its course offerings and explore opportunities for new campuses and teaching methods, recently incorporating hybrid course offerings, which include both in-seat and online components.

AHE’s 40th anniversary will be observed throughout the college on Aug. 29. The date was selected to coincide with the rededication of a remodeled St. Louis campus, the place where the Division first started. Check with your campus office about anniversary activities, as well as your campus’ homepage and Compass blog at compass.ccis.edu for more information.