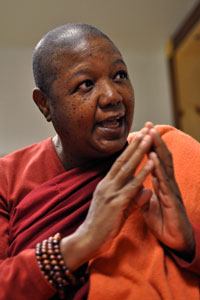 What does a remarkable journey entail? Is it traveling to lands few have ever seen? Or, is it having the courage to follow your heart when seeking enlightenment and inner peace? For the Venerable Pannavati Bhikkhuni, the journey truly has been a remarkable one.

This proved to be a life-changing decision, as she became ordained in the Theravada and Chan Schools of Buddhism. From working with the “Untouchables” in India, to speaking in Washington D.C., Ven. Pannavati has become an influential voice for disadvantaged populations across the globe.

The Venerable Pannavati Bhikkhuni, an ordained Buddhist nun, is the co-founder and co-Abbot of Embracing Simplicity Hermitage, a Buddhist hermitage based in Hendersonville, N.C. On Oct. 8, Ven. Pannavati comes to Dorsey Chapel on the Columbia College campus to present her lecture “Courage to Seek, Courage to Give: Odyssey of a Buddhist Nun.”

On Oct. 8, Ven. Pannavati comes to Dorsey Chapel on the Columbia College campus to present her lecture “Courage to Seek, Courage to Give: Odyssey of a Buddhist Nun.”

Ven. Pannavati is an international figure and has received many accolades for her religious and humanitarian work. In 2008, she received the Outstanding Buddhist Women’s Award and a special commendation from Her Royal Highness Princess of Thailand for humanitarian acts in 2009. She also established the first Thai and Cambodian ordination platforms for women in 2009 and 2011, respectively, and was the recipient of the 2011 Women in Engaged Buddhism Award, presented by the Buddhist Council of the Midwest.

She also is the founder of My Place, Inc., an organization based in Hendersonville, N.C. that offers refuge, job training and social enterprise opportunities to homeless youth in the area. Since its inception in 2009, My Place Inc. has housed more than 75 homeless youth and looks to open a bakery in 2014 that will fully fund the organization. Ven. Pannavati also guest teaches at New York Insight Mediation Center and Spirit Rock Mediation Center in Woodacre, Calif. Known for ordaining Buddhist nuns from around the world, Ven. Pannavati returns each year to Thailand to ordain and support local nuns.

The event is part of the Schiffman Lecture in Religious Studies series, which brings celebrated scholars to Columbia College to lecture on the influence of religion in politics, culture and education.