College to endow scholarship in honor of Col. Randerson 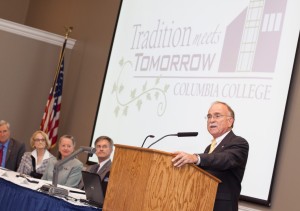 In 1995, Mike Randerson began working at Columbia College. Anita Abbott Timmons, vice chair of the board of trustees, said qualities of Randerson, such as intellect, imagination, enthusiasm and optimism have made him and the Adult Higher Education division so successful.

And, “By the way, he’s a really nice guy,” she said at the director’s conference on Sept. 10. “We are so fortunate to have Mike at the helm of AHE for the past 18 years.”

Timmons expressed deep gratitude to Randerson, and said there is no doubt he will be greatly missed when he retires at the end of January, but he leaves an extraordinary legacy. With gratitude for his remarkable contributions and inspired leadership, Timmons announced the news that a fundraising drive is launching to endow the Col. Mike Randerson Scholarship at Columbia College.

Randerson said when he first heard about the scholarship he was almost at a loss for words. What he did say, though, was that he was honored, humbled and hesitant. He was hesitant because so many people have contributed to adult higher education and deserve to be honored. But, he continued, a very important person once told him, “Let yourself be a vehicle for doing good.”

So, Randerson said he doesn’t see it as personal recognition. He thanked everyone for their work with the division and thanked the directors for all they do.

“In my heart, it is recognition we all have worked for, and I appreciate it very much,” Randerson said.

Mary McCleary Posner, the chair and founder of the Memorial Day Salute to Veterans who has known Randerson since 1992, will chair the scholarship fund effort.

Sept. 10 officially began the fundraising drive, which will last until the scholarship is endowed. And because she says she wouldn’t ask for help with something she herself doesn’t support, Posner presented the first gift toward the scholarship to Timmons and Dr. Terry Smith, interim president.

Smith thanked Posner for her generous contribution and her willingness to lead the scholarship drive.

As Mike Kateman, executive director of Development, Alumni and Public Relations, concluded the presentation, he gave a fitting recognition to Randerson and the Col. Mike Randerson Scholarship.

“You are definitely a vehicle for good,” Kateman said.