From Serbia to Missouri 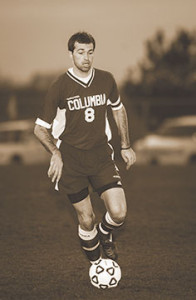 Soccer is one of the most popular sports in Belgrade, Serbia. So it’s no surprise that Vladimir Roganovic started playing it in his hometown at just 7 years old. “My friends in the neighborhood were always playing it, and they wanted me to go play with them,” he says.

It wasn’t long before coaches noticed his talent. He quickly rose through the ranks to play at the highest levels in the country. By the age of 10, he was playing for the prestigious Red Star Belgrade Club in the youth academy division. Five years later, he was playing for the Under 17 Serbian National Team, where he and his team competed with others worldwide.

Soccer was his passion, so he thought about playing professionally. However, he wanted a back-up plan just in case things didn’t work out.  As he finished high school, he decided he wanted to get a college degree in the United States. A friend suggested that he start looking for schools by emailing soccer coaches.

One problem – he didn’t have a computer at home. So he bought one and started contacting coaches throughout the country.  He also made VHS tapes of his games to show the coaches his skills on the field.

One of the coaches he talked with was John Klein from Columbia College. When Klein offered a full scholarship, Roganovic accepted, even though he wasn’t exactly sure where Columbia was.

While he might have been a little nervous about coming to a smaller city, Roganovic quickly saw that he had made the right decision. “Once I got here, I really loved it. It’s a great college town. And I really liked the smaller size of the school because the professors all knew me and my teammates.”

It wasn’t long before Roganovic made a name for himself at Columbia College with his hard work and leadership on the soccer field. He was team captain for three seasons, including 2003, when he helped his team qualify for the NAIA National Tournament for the first time in the school’s history. He was a four-time All American and the first player in the history of the school soccer program to be named First Team All American in 2004. Other honors included the American Midwest Conference (AMC) Freshman of the Year in 2002 and Columbia College Male Athlete of the Year in 2005.

Soccer wasn’t the only part of his plan. He majored in international business and, at first, planned to move back to Serbia to work with an international company. While at college, he met his future wife, Shannon, and decided to stay in the U.S.  After graduation, they both moved to New York City. There, he played for a semi-professional team, the New York Islanders, while searching for a day job. With the competitive job market, he decided he needed a master’s degree, so five months later, they moved back to Columbia. There, he completed the master’s program in business administration while working as a student assistant for Coach Klein.

After getting his MBA, Roganovic had another dream — to develop his own soccer club. “I came to the U.S. on a full scholarship,” he says. “So one of my goals is to develop soccer players who can achieve the same and get their education paid through hard work and talent.”

He moved to Kansas City where he and a business partner founded Puma FC, a premier youth soccer club for kids ages 4 to 18. In just three years, the club has grown from four teams to more than 500 members. The club also launched a nonprofit after-school program, Chance for All, which provides opportunities for underprivileged children to participate and develop a love for the game.

During the day, Roganovic is engaged in running the business, but late afternoon and weekends, he’s also coaching the teams. “I always want to coach soccer because it’s my passion,” he says. “When you teach kids something in practice and see them do it in the game, that’s the most rewarding part for me.”

Roganovic is one of five being inducted into the Athletic Hall of Fame for Columbia College during the college’s Family Day & Homecoming weekend.