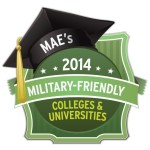 Military Advanced Education, a publication that focuses on educational services and opportunities for military students, listed Columbia College in its 2014 Guide to Military-Friendly Colleges & Universities and ranked the college in the top 15 percent of all schools nationwide.

According to MAE, selected schools have met rigorous criteria informed by education services officers across the services and have truly earned the designation of “military-friendly.” Institutions such as Columbia College, says MAE, set the gold standard for serving the men, women, spouses and retirees who serve or have served our country.

Columbia College has consistently received top rankings for its commitment to military education. The college also has been named to the Military Times’ “Best for Vets” list and the Military Friendly Schools list, which recognized the college as ranked in the top 20 percent of colleges nationwide.

With the government shutdown last month, military servicemembers were not able to rely on military tuition assistance, as it was no longer authorized or granted for new classes. In an effort to create consistency for our military students, Columbia College deferred tuition charges for military servicemembers and veterans while they sought other funding, and the college offered the option of a six-month payment plan or the option to withdraw with no liability if they could not secure other funding.

The list of the top military-friendly schools will be published in MAE’s December issue.