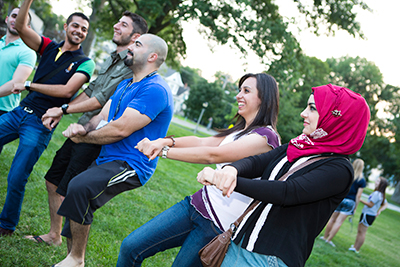 A group of students from all around the world sat in a room with massive sheets of white paper strewn across the floor. Nick, a blond-haired football player, dreams of a McDonald’s burger on one sheet. On another, the hand of a woman with perfectly manicured red nails grasps a Starbucks coffee. A different poster attracts attention — it’s Britney Spears, gold hair and green eyes, complete with a tube top, shorts, a pizza with a lot of cheese, Coca Cola and a waving red, white and blue flag.

It was international student orientation at Columbia College when the new students from Iraq, Brazil, China, South Korea and various other countries were asked to draw their stereotypical American. Most had blond hair and blue or green eyes, and many included materialistic props. But these seemingly just-for-fun drawings led to a much deeper discussion.

“We talked about how they’ve been here and seen that not every American has blond hair and blue eyes,” said Britta Wright, director of international student services. “We talked about how stereotypes can be hurtful, and people are not always what you see in movies and on TV.”

These students made the decision to come to the United States to learn English and attend college, but they also came motivated to learn about American culture and pass their country’s culture along as well. Wright helps ensure these two missions are ones deeply ingrained in Columbia College’s own culture.

Wright has been involved with international services since 1994. First she worked in admissions, but in 1998, she entered her current position in International Student Services. She was the only employee in the department.

Now, the team consists of Wright; five college employees across the admissions, ESOL and evaluations departments; a faculty member who coordinates study abroad students; a graduate assistant and a student employee.

“Though we’re all under different umbrellas, we work together closely and serve on several committees together,” Wright said. “As the college grows, the international piece is becoming more noticeable, and we’re thinking about where we want to be and where we want to go.”

That’s why she finds it so important to foster international awareness at Columbia College.

Students who travel abroad bring other countries’ cultures back to our campus as well. The college has student exchange partnerships with Robert Gordon University in Scotland, Jeju National University in South Korea and the University of Shiga in Japan. When an international student comes to Columbia College, the college gets a “credit” to send one of its students to the international institution. But students aren’t limited to these institutions. The college has a different partnership with Kongju National University in South Korea and Rangsit University in Thailand. Students also can work with Dr. Brian Kessel, the study abroad coordinator, to find information on other providers and study abroad opportunities. One student is studying at The Umbra Institute in Italy, a program coordinated by Arcadia University, and another studied in Russia this past spring and summer.

This fall, there are 130 international students taking classes at Columbia College through the Day, Evening and Graduate programs. The top countries represented on campus are China, South Korea, Brazil, Iraq, Vietnam, Nigeria and Saudi Arabia.

When international students first arrive at Columbia College, a welcome basket with a pillow, sheets, clothes hangers, snacks and an alarm clock awaits them. This is provided by International Student Services to help get students settled as soon as possible because many can’t pack those necessities. Throughout the students’ stay at the college, the department also has various programs to support them.

These programs encourage success among the international students.

The international students feel that Wright and the rest of the international team make a big difference, according to Hasan Alrubaiey, an Iraqi student here for six weeks of intensive English language study through a program administered by the International Research and Exchanges Board (IREX).

Alrubaiey’s drawing of a stereotypical American was different from the others. A red-headed man with a nicely drawn button-up shirt, tie and slacks held a briefcase – he was ready to go to work. “It’s my ideal American,” he said.

When it was time for the IREX students to return to Iraq, International Student Services and the ESOL Program staff hosted a farewell party. Each student was welcome to speak at the podium. Alrubaiey took the stand with a stack of pink envelopes in his hand. As he spoke about how much he would miss the United States and Columbia College, his eyes began to well with tears, and he quickly ended his speech.

But as he stepped away, he handed one of the envelopes to the college employees who had meant so much to him during the program. Wright, Dr. Miranda E. Wilkerson, Heather Ditzer, Mary Lynn Lobello and Liz Metscher took their envelopes as he embraced each one in a hug.

Inside the card, it read, “I will always remember you.”