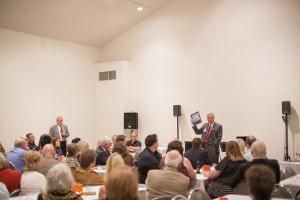 Luella St. Clair was a pivotal figure for Christian Female College. Her impact is evident at every turn on our campus. During Luella’s presidency, she oversaw the construction of St. Clair Hall, Launer Auditorium, Dorsey Hall, Missouri Hall and the iconic Rogers Gate.

On Oct. 10, President Emeritus Luella St. Clair was posthumously inducted into the Boone County Historical Society Hall of Fame. According to its website, “The Boone County Hall of Fame identifies individuals and organizations whose contributions of talent and ingenuity made an impact on Boone County’s past, helping it to become the progressive and thriving county it is today.”

Trustees, alumni, faculty and staff filled two tables at the reception and awards ceremony, which was held at the Boone County Museum and Galleries in Historic Nifong Park. The Boone County Historical Society was founded in 1923.

St. Clair served as president and co-president of the institution during three intermittent terms that spanned 30 years. She is one of only two ever presidents emeriti. The other is recently retired Dr. Gerald Brouder.

Along with the many construction projects, St. Clair oversaw the creation of the college magazine in the 1890s, expanded academic programs, introduced the Ivy Chain ceremony in 1900 and supervised the creation of the Student Government Association in 1914.

Watch the video, organized by the public relations department and produced by Columbia College alumnus Scott Claybrook, to learn more about St. Clair’s contributions to the college as well as her continued service to the Columbia community after her resignation.