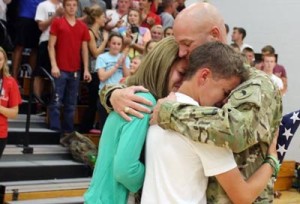 As a Command Sergeant Major in the Missouri Army National Guard, Lederle and his family were accustomed to long periods of time apart from each other. So, when Lederle was deployed March 2012 to Afghanistan as part of an agribusiness development team, he thought wouldn’t see his family for at least a year. However, once he arrived in Afghanistan, it was evident that his tour would be much shorter.

With the president’s directive for the armed forces to leave Afghanistan by 2014 and changing personnel needs on the ground, it became clear that Lederle and his team would be home by early September. Lederle spoke with his wife, Kena, almost every day about his status, but both were careful not to get their hopes up.

“We knew the possibility of coming home early existed, but we didn’t want to say anything to the kids, in case the date changed,” Lederle said. “We knew it might be a rollercoaster of emotions, so my kids were not expecting to see me for a year.”

Once Lederle arrived back in the United States, he began planning the surprise of a lifetime. Lederle had approximately one week to complete his post-deployment duties at Camp Atterbury, located in Indiana. At this point, only his wife knew that he was back on American soil; his children, Samantha and Trinten, had no idea. To keep the ruse intact, Lederle went so far as to call his wife from his computer, to avoid the chance of his children seeing the call come from his cellphone.

During this time, Lederle reached out to local media, the National Guard and Southern Boone High School, where both of his children attended school, to help him pull off the ultimate surprise. Working with Lederle, Dale Van Deven, Southern Boone’s principal, came up with an idea to hold an assembly where Lederle’s service in Afghanistan would be honored. The beauty of the plan was that Samantha and Trinten would be front and center in front of their peers, accepting a flag on behalf of Lederle. What happened next was awe-inspiring.

“As I came around the bleachers, my kids’ backs were toward me,” said Lederle. “When I was hugging my children, there wasn’t a dry eye in the house … (the students) were caught up in the moment as well.”

Lederle says that moments like these help veterans feel how important and appreciated their service really is. Lederle’s passion for service has helped shape him in his current role.

“I may have retired from the National Guard, but I haven’t stopped serving,” said Lederle. “This position allows me to look at how (Columbia College) can positively impact all service branches.”

Columbia College holds Veterans Day events to honor servicemembers and veterans, hosting several activities during the week leading up to the Nov. 11 holiday, beginning with the decoration of Bass Commons. Dozens of American flags will be placed around the lawn, and yellow ribbons will be tied in bows around tree trunks.