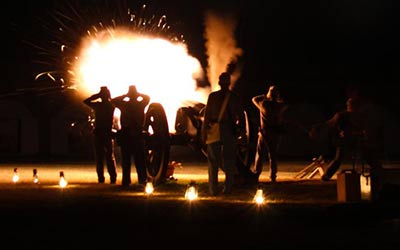 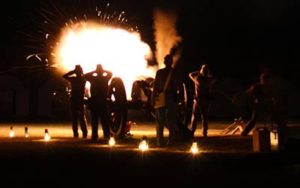 If you’re among the millions of Americans who watched the World Series the last two weeks of October, you probably noticed that Major League Baseball honored active-duty military members and veterans at each game. A service member even sang “God Bless America”each night during the seventh inning stretch.

The longstanding connection between the military and baseball is of no surprise to Columbia College student and National Park Service Ranger Wayne Rogers. 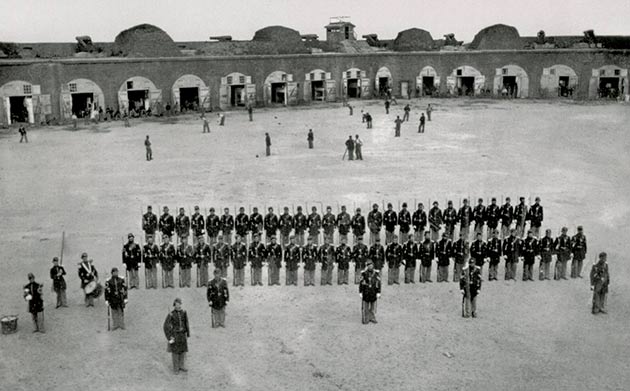 Union soldiers of the 48th New York Volunteers play a game of baseball in the first-known photograph of baseball during wartime, taken in 1862. Photo courtesy of the National Park Service.

Union soldiers of the 48th New York Volunteers play a game of baseball in the first-known photograph of baseball during wartime, taken in 1862. Photo courtesy of the National Park Service.

“What’s interesting about the 1862 photograph of the Union soldiers of the 48th New York Volunteers is that it’s the first-known photo of baseball during wartime, and one of the first-known photos of baseball period, based on the buildings in the background,” explains Rogers. This is one of many American history stories Rogers explained during the nearly two years he was a ranger at Fort Pulaski National Monument Park in Georgia. 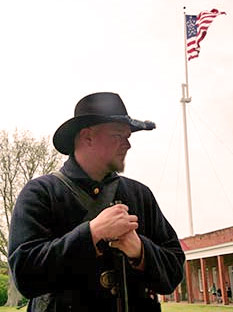 Soldiers are soldiers. The game of war never changes. Only the toys with which you play it do.

Until June you could find Rogers clad in Civil War-era wool uniforms, both Union and Confederate depending on the day, roaming the grounds of the park, educating tourists, military groups and Boy Scout troops through exhibitions and re-enactments. Adept at weapons demonstrations, Rogers can routinely load three volleys per minute using a single-shot musket.

Rogers served in Operation Iraqi Freedom with the 1st Armor Brigade Combat Team, Third Infantry Division. He was stationed at Fort Stewart, Ga., where he began taking classes at the Columbia College campus there, as well as through the Online Campus. He is nearing completion of his associate degree in general studies, but with passion for the subject, hasn’t dismissed the idea of one day pursuing a bachelor’s in history. 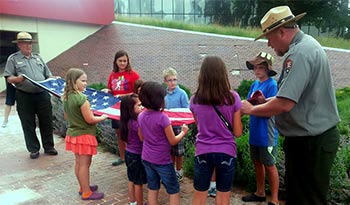 On Flag Day Rogers teaches children with the Junior Ranger program, an outreach program of the National Park Service, about how to fold the American flag.

While on active duty at Fort Stewart, Rogers began volunteering at the Fort Pulaski park, demonstrating another relationship the military has held nearly as long as it has with baseball – with the National Park Service. Since the late 1880s, Army rangers have protected Yellowstone, Sequoia and Yosemite National Parks, and have used many national parks as training grounds. When Rogers retired from the Army, he became an employee of the park through Post to Parks, a military outreach program of the National Park Service.

In June Rogers, along with his wife and two sons, moved to the Philadelphia area where he grew up. Continuing classes through the Online Campus, Rogers spent most of his summer as a ranger at Valley Forge National Park, where he stepped even further back in time to the Revolutionary War, trading his Civil War rifled musket for an earlier modeled flintlock musket. 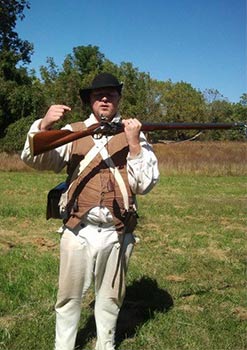 On an average day, he walked guests through the park, explaining to them the importance of the events at Valley Forge. Thanks to Major General Friedrich von Steuben, who created a manual of military drills and tactics that commonly became known as the “blue book” and is still studied today, Valley Forge is often considered the birth place of the modern U.S. military. Though no bullet was fired at Valley Forge, more than 2,000 soldiers died at the winter encampment of the Continental Army, where George Washington made his headquarters, due to exposure, malnutrition and influenza.

Though temporarily furloughed due to the federal government shutdown, Rogers enjoyed his time at Valley Forge, which will come to a close at the conclusion of Veterans Day activities on Nov. 11. Rogers will participate in a commemoration program, which will include guest speakers and unite veterans with a group of new military recruits on their way to basic training who will complete their swearing in at the event. Following the event, park rangers will participate in a living history exhibit with representatives of each American war presenting artifacts and gear specific to the era. 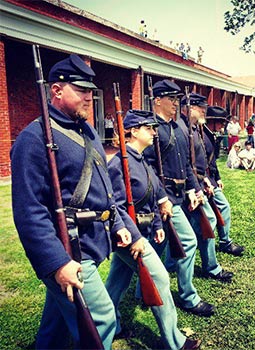 Rogers will don his Operation Iraqi Freedom gear for the exhibit.

Rogers’ trip through time isn’t over yet, however. Beginning in December he will work in the visitor center at Independence Hall in Philadelphia, where the Declaration of Independence and the Liberty Bell are housed. As he extends his visit to this time period, Rogers is embracing yet another opportunity to employ his passion for American and military history.

“Working at Independence Hall is stepping out of my comfort zone of military history, but I hope to revive their historic weapons program from the French-Indian War to the Civil War.”

Rogers is just the man to do it. As a veteran who has served overseas, Rogers continues to serve the country as a time traveler, reminding us of a rich history of nearly two hundred years of veterans who have served the country.

On November 11 and throughout the first two weeks of November, people across the country will celebrate the efforts and sacrifices of our veterans.

For Columbia College students, recognition will take place at the main campus and at our Nationwide Campuses as well. Events include:

Main campus
Decoration of Bass Commons with dozens of American flags placed around the lawn, and yellow ribbons tied in bows around tree trunks.

All campuses
Throughout the week, students, faculty, staff, alumni and friends will write notes to local veterans. Many people also will send Columbia College- and Veterans Day-themed e-cards, thanking veterans for their service.