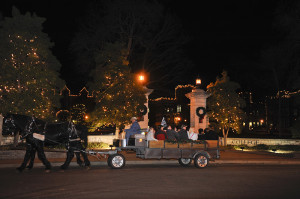 As this year comes to a close, we recognize an iconic landmark that celebrated 100 years in 2013.

The construction of Rogers Gate was completed in November 1912, but not formally dedicated until commencement on May 27, 1913.

The stone gateway entrance to the college was built under the direction of President Luella St. Clair, who also oversaw multiple construction projects on campus. Watch a video about Luella St. Clair’s life here. Although planned as part of the commemoration of the Jubilee Year celebration in 1911, the gateway was not completed until 1912. Alumnae, trustees and friends of the college contributed the $1,735.29 to erect the gate as a memorial to the third president of the college, Joseph Kirtley Rogers, who served from 1858 to 1877. After landscaping, driveway modification and addition of sidewalks, the Rogers Memorial Gateway was dedicated.

Rogers Gate means a great deal to faculty, staff and students alike. It protects and guards all who enter Columbia College.

Former president James Miller, who served from 1938 to 1956, had a habit of slowly walking up to the college, taking 10 minutes to follow the curved approach from Rogers Gate to his office.

Under Kenneth Freeman’s administration, which lasted from 1956 to 1965, Rogers Gate was sandblasted and straightened. In 1964 and some years following, there was a living nativity scene in Rogers Gate during the holiday season.

In 1999, Student Affairs began giving a student(s) the Rogers Gate Award at the annual year’s end Student Affairs Night of Recognition event. It is the highest and most prestigious honor a student can receive from the department. The award is presented to students who distinguish themselves as outstanding Columbia College citizens, scholars and leaders.

Now, Rogers Gate is part of a tradition for incoming students. Storm the Gate has been held for the past two years as a celebration of the new class joining the Columbia College family.

Ever since its dedication in 1913, Rogers Gate has served as a reminder of Columbia College’s historic past, and it will continue to serve as a symbol for entry into and exit from the college.

Information on Rogers Gate was found in “Petticoat Pioneer” by Allean Lemmon Hale and “Columbia College: 150 Years of Courage, Commitment, and Change” by Paulina A. Batterson.