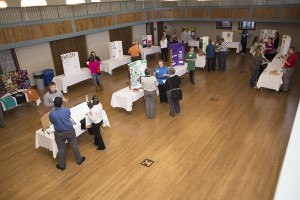 Matt Carson, a junior, developed an online community called “Do it at Home.” He believes that people ages 20 through 29 can incorporate more DIY in their lives to create a sense of self-worth. Carson has created a Facebook group, which he thinks can eventually spread to Pinterest or even its own standalone website.

Santana Figueroa, a senior, paired up with Rainbow House to raise awareness of the struggles of homeless youth. November is Homeless Youth Awareness Month, and Figueroa believes that by focusing on raising awareness of youth homelessness, it can raise the awareness of homeless struggles in general. Figueroa wants service projects on campus to focus on helping the homeless.

Nick Fosse, a sophomore, roomed with Ramy Elias, a student from Iraq who was here with the IREX program for six weeks. Fosse didn’t know much about Iraqi culture before meeting Elias, but the experience inspired him to work to end stereotypes of Iraqis and other people from the Middle East. In an effort to make his project more than just an idea, Fosse spoke about changing U.S. perceptions of Iraqis at his former high school, Jackson High School, on Nov. 26.

When Donnie Andrick, a sophomore, heard an in-class presentation on human trafficking, she realized how prevalent the problem can be in Missouri – not just in foreign countries like in the movie “Taken.” Andrick came up with the idea to create flyers to post at truck stops, where sex trafficking frequently occurs. The flyers list signs of possible sex slavery and provide a number for truckers to anonymously report suspicious behavior.

The Emerging Leaders Institute students are enrolled in a year-and-a half-long course devoted to leadership education and personal development.

“They worked all semester to develop a project that would encourage change to something in the community or on a global level that they are passionate about,” said Stephanie Sanders-Cagle, director of student engagement and leadership development.