Team wins second at Minute to Win It BIG Competition 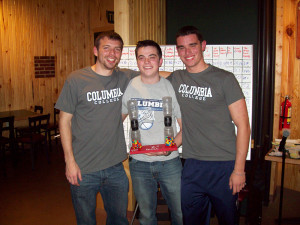 On Nov. 12, Columbia College sponsored “Minute to Win It BIG.” The competition was based on an NBC game show, Minute to Win It. The team from Columbia College, which included students Derrick Carson, Alex Bodine and Mitchel Smith, brought home the 2nd place trophy in the Community Challenge competition category. For this category, teams had to race the clock to complete a series of tasks.

Columbia College is a proud sponsor of Big Brothers, Big Sisters, the oldest and largest youth-mentoring organization in the United States, said Ann Merrifield, director of business development. It has been the leader in one-on-one youth service for more than a century, developing positive relationships that have a direct and lasting impact on the lives of young people. Big Brothers, Big Sisters serves children ages 6 through 18 in communities across the country – including ours.

Tasks (that you could turn into a game with your own family!) included:

Spin Doctor – Players have to spin a coin for a teammate who must stop the coin in a vertical position using only one finger.

Junk in the Trunk – Players must wiggle and shake eight ping pong balls out of a Kleenex box tied around the waist.

Chocolate Unicorn – Seven small chocolate cakes (such as Ding Dongs) must be stacked on the forehead and remain standing for three seconds.

Chop Stack – Players must stack three glue sticks on top of one another using chopsticks in one hand.

Pink Elephant – Players will wear a headband with a slinky attached. The players will have to return the slinky to its compacted form on top of their head.

Face the Cookie – A player must move a cookie from the forehead to the mouth using only facial muscles.