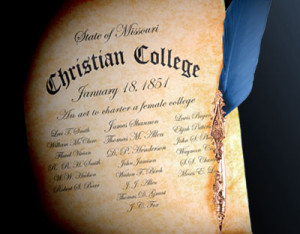 January is a special time of year. For many, the month of January represents an opportunity to wipe the slate clean and attack goals with renewed sense of vigor. Whether it’s resolving to lose ten pounds, or finishing up coursework toward a master’s degree, people tend to find their focus during this month. January also is a special time for the Columbia College family, providing a chance to reflect on the rich history of the college.

On January 18, 1851, Christian Female College received its charter from the Missouri State Legislature. These were heady times – over the course of the year, people received their first glimpse of Moby Dick, braved massive flooding in the Midwest and witnessed the birth of the New York Times. The founders of Columbia College embraced this pioneering spirit, and by doing so, became the first college west of the Mississippi to educate women. When the college opened its doors in April, the initial class consisted of seven students, with a complement of three faculty members.

Perhaps the dream of what Columbia College could become was best captured by Allean Lemmon Hale in her published history of the college, Petticoat Pioneer:

“The morning was chilly, but the young man in the doorway was warm with excitement. Less than three months had passed since the Legislature of Missouri had chartered the state’s first college for females. And now, on Monday, April 7, 1851, its president scanned the muddy hill for sight of his first student.”

Today, the college has a total enrollment in excess of 31,000 students, 35 locations across the country and more than 70 full-time faculty members. Columbia College also has demonstrated a commitment to innovation and reinvention, becoming an early adopter of technology, most notably in the realm of online education. The college boasts a significant online presence, and has established itself as one of the most respected purveyors of online education. While these factors have helped make Columbia College a model institution, it is important to remember the college’s roots; Charter Day provides this perspective. It is important to reflect on the struggles, triumphs and heart-warming moments in the college’s history and to never forget the innovative spirit of the founders that has served the college well for generations.

Please join us to celebrate Columbia College’s storied past and bright future on Thursday, Jan. 16, at 11 a.m. in Dorsey Gym. Interim President Dr. Terry Smith will provide remarks. Dr. Brad Lookingbill, professor of history, will look at national mid-19th century events of interest and Nollie Moore will perform patriotic selections from the era at the 163rd anniversary of Charter Day. There also will be an announcement of three major gifts at the ceremony. Nationwide students can still participate in the celebration, as Charter Day will be broadcast live to Nationwide Campuses at www.ccis.edu/livestream.