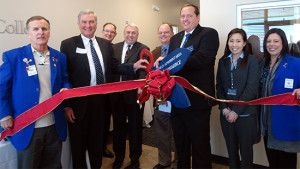 More than 30 faculty, staff, local and state government representatives and members of the Waynesville, Mo., community braved the bitter cold and snow Jan. 7, to welcome Columbia College to the neighborhood with a ribbon cutting ceremony at the college’s new course location. Campus Director Mike Siegel welcomed the gathering and served as master of ceremonies while Dr. Terry B. Smith, Columbia College interim president: Pete Hiltner, faculty member and alumnus; and Mike Dunbar, Waynesville Chamber of Commerce president addressed the group during the event.

“We are very excited to share our new location with you today,” Smith said. “Updating facilities on our main campus as well as our Nationwide Campuses is important, as it aids in attaining our mission of teaching and learning. The expanded classrooms and computer labs available here serve as an example of the type of work we seek to fund – those that will allow us to better serve our students now and in the future, allowing current and future generations of students in the central and southern Missouri areas to “go for greater” by improving their own lives and those of their families.”

The location features three classrooms, a state-of-the-art computer lab with 28 computers, space for academic advising and other student services. It is located in Townfield Plaza at 320 Ichord Ave., Suite A. 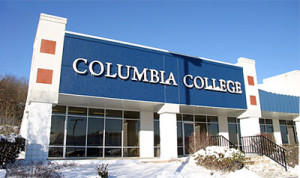 Like many of the early Columbia College Adult Higher Education (AHE) facilities, the Fort Leonard Wood campus was founded to facilitate the demand for higher education by military personnel. The campus has realized continued growth the last four decades, becoming the first AHE site to reach 1,000 enrollments in the late 1990s. This continued growth has necessitated expansion and a continued strong commitment to education in the area.

“The Columbia College-Fort Leonard Wood campus is now in its 40th year of operation serving our community,” Siegel said. “In the early 2000s Fort Leonard Wood had considerable growth, and, in 2004, we opened a second administrative office in St. Robert. This allowed us to provide better service to our off-post students. Today, we are here to celebrate the opening of our new facility in Waynesville that will allow us to better-serve the surrounding community.”

To learn more about Columbia College and its Fort Leonard Wood campus, log on to www.ccis.edu/ftwood.

View photos from the ribbon-cutting ceremony