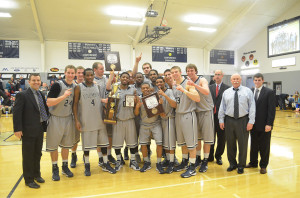 The 11th annual Cougars vs. Cancer Classic tournament was held Dec. 28 and 29, raising money for the American Cancer Society.

Every year, proceeds from the tournament are donated to the American Cancer Society. Last year, the tournament raised more than $6,100 through ticket sales, raffle tickets, silent auction bids and other donations.

Originally known as Coaches vs. Cancer, the first Cougars vs. Cancer Classic occurred in January 2003. After a few years, the name was changed to reflect the mission of the tournament. In that first year, the Cougars men’s and women’s teams were victorious with a perfect 4-0 record.

The Cougars will continue their seasons on Jan. 2 against Park University.