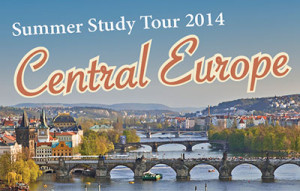 The beauty of a study tour with Columbia College is that it can be anything you want it to be, but it’s assured to be a memorable adventure. A tour happens each May, and this year, the tour is a 12-day tour of Central Europe. In addition, students have the option to study in a multitude of locations during the summer through the Missouri Study-Abroad Inter-Collegiate Consortium (Mosaic).

This year’s study tour, May 21 – June 1, includes visits to the cities of Berlin, Dresden, Prague, Krakow and Budapest. Among the sites you will see are Checkpoint Charlie and the Berlin Wall, Hradcany Castle and St. Vitus Cathedral (Prague), Auschwitz concentration camp, Krakow’s medieval market square and Wawel Castle & Cathedral, and the Royal Palace and Hungarian parliament in Budapest.

The tour is offered in conjunction with classes students may take for full credit as part of the March session. Classes are web-assisted and financial aid is available. Registration begins Feb. 14. Keep in mind, there is a Study Abroad scholarship available to defray some of the costs of this study abroad experience.

Cost of the tour is $3,823 and includes round-tip airfare, hotel accommodations, dinner and breakfast daily and admittance to all attractions.

Classes offered this year include:

Arts, Architecture and Design of Central Europe focuses on the art, design and architecture of Central Europe. The scope of this course includes Austria-Hungary during the 1890 – 1920 era, German Expressionism, the Bauhaus, and the Nationalist Socialists campaign against Modernist and avant-garde art in the 1930’s, resistance efforts by some German museums, and issues relating to censorship and art for political propaganda. The instructor is Lee Stanton, an adjunct in art appreciation.

Voices of Resistance—Three Playwrights focuses on the plays of three key playwrights, who spoke in resistance to the governments of their homelands: Bertolt Brecht, Slawomir Mrozek and Vaclav Havel. The course instructor is Robert Boon, a world traveler and adjunct in humanities.

Travel Writing – Central Europe focuses on the genre of travel writing, with an emphasis on landscape and environment, leading to students producing their own original essays. The instructor is Robert Boon, a world traveler and adjunct in humanities.