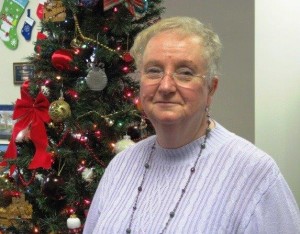 Dori Cantrell is the academic advisor for Columbia College-Kansas City. She was recommended to be featured in Connections by Kate Lutz, administrative assistant at the Kansas City campus. Here’s what Lutz had to say:

“I would like to suggest Dori Cantrell. She is the academic advisor for the Kansas City campus. Dori knows her stuff. She received her bachelor’s and master’s degrees from Columbia College. She began as an administrative assistant. She knows everything! Her students love her, which was obvious at graduation in September. I teared up at how respectfully and gratefully the students treated her. She has a wonderful way of encouraging and genuinely caring about the students. She is beloved. She is also a very wonderful coworker. Everyone here at our little campus is! She is a model employee as well!”

When did you start working for Columbia College?
I started working part-time (20 hrs. a week) on July 31, 2003, at the Independence location.

What excites you most about working here?
I love to see the looks on the students’ faces when they realize that they are close to completing their degree and then getting them to plan to participate in graduation ceremonies. I love being able to help them discover that learning never stops and that earning their degree is a stepping stone for the next part of their journey.

What were you doing previously?
Before I came to Columbia College I had worked for a contractor with GSA but my job had been eliminated, so I was looking.

Where are you from originally?
I was born in Palo Alto, Calif., and grew up in Menlo Park, Calif., which is about 45 minutes south of San Francisco. I moved to Missouri in 1994.

Who or what influenced you professionally?
First, I think it was Tammy Shumate who was my advisor when I came back to school. All the instructors that were teaching here at the Kansas City campus were great, and each one influenced me to become a better student and to work towards my goals in earnest. One of the biggest influences was Bob Jones when he was our director. He encouraged and supported me to complete my bachelor’s degree and to go on to achieve my master’s degree.

Tell us about your family.
I was the last of four children in my family. I had a sister and two older brothers. We were a close family. My parents, sister and one brother have passed away. My oldest brother lives in Fremont, Calif. I am married — we just celebrated 17 years in October; and I have two sons from a previous marriage.

What are some of your hobbies and interests?
I like to paint and listen to music. I haven’t had much time for painting, but I’m working on that.

Favorite book and/or author?
I don’t think of just one author, but my top three are Barbara Johnson, Sheila Walsh and Max Lucado.

Favorite type of music?
Easy listening and oldies from the ‘50s and ‘60s.

Favorite sports team?
Before I moved to Missouri it was the SF 49ers and the Giants, now it’s the Royals and the Chiefs.

Tell us something about yourself not many people know.
I attended high school in California with Lindsey Buckingham and Stevie Nicks from Fleetwood Mac.