Learning beyond the classroom in San Diego 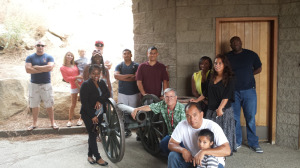 Students in the History 121: American History to 1877 course at the San Diego campus visited the San Pasqual Memorial Battlefield State Historic Park near Escondido, Calif. The park is on the site where U.S. soldiers fought Mexican “Californios” on December 6, 1846, during the Mexican-American War. The course is taught by native San Diegan Steve Thorn. His family arrived in San Diego in the 1850s.

Members of the history class also visited the Veterans Museum and Memorial Center at Balboa Park in San Diego. The students met 92-year-old Pearl Harbor survivor Mr. Stu Hedley. In 2008 the The San Diego Union-Tribune featured a story about Hedley, stating that he had survived 13 sea battles during World War II, and was one of two men who survived a direct hit by a Japanese bomb on a turret of the U.S.S. West Virginia. The museum honors the sacrifices made by native San Diegans who served in San Diego-based commands.