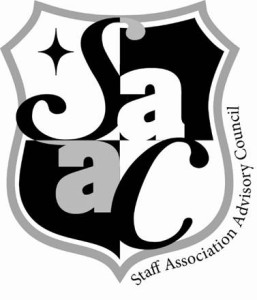 Smith said 11 proposals for the LEAN initiative have been accepted. The Administrative Council prioritized the proposals today, and will begin working on the top five immediately. Smith said these proposals will have a significant impact on student and employee experience.

Randerson touched on the presidential search and encouraged staff to attend the forums while the candidates are on campuses, whether in-person or virtually. Read more about the search.

He mentioned some external headwinds the college has faced, such as the government shutdown, decreased military assistance, the new federal educational scorecard, student debt concerns and financial aid fraud. But Randerson assured the staff that though the college’s enrollment numbers are down, the college is in a good position to weather the storm. With a high endowment and no debt, the college is moving forward in many ways and is seen as a leader in identifying financial aid fraud.

Randerson announced the creation of a new 2 + 2 partnership with Eastfield Community College in Mesquite, Texas. This will mark Columbia College’s 35th Nationwide Campus. The college is just waiting for state approval, and hopes to open the campus in the March to August timeframe. He also mentioned the process in the marketing department that helps determine new markets for the college so that we always are thinking about where we want to be.

A question was asked about acquisition of property and expansion of main campus. Randerson directed the staff to the Master Plan, which lists future development and was approved by the Columbia City Council in August. He said in the last couple of months, the college has acquired two properties across from Wilkes Street. Eventually, he said, the college hopes to bring a softball field back to campus.

A question was asked regarding the Masters in Human Services degree. The Higher Learning Commission has changed some rules regarding establishing graduate degrees. Columbia College began offering a Masters of Education in Educational Leadership this winter, which was an easier process because the college already had the Master of Arts in Teaching, which is in the same field. Because the college had no similar graduate program as human services, there is a different process to establish the degree. It is in progress now.