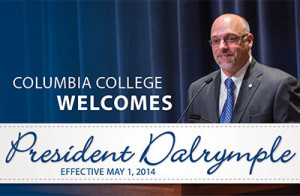 “This is the most exciting time that I have ever had at Columbia College,” said Dale Simons, trustee of the college and a Christian College alumna. “We made history today. It was the most transparent and thoughtful process that I have ever experienced, and we’re going to be so proud of our new president.”

Dalrymple grew up in in a small town in the western part of upstate New York.

“I came from hard-working people, but that hard work didn’t necessarily get you anywhere,” said Dalrymple. “The way I made it out was through education. To say that I take it seriously and hold it sacred is a great understatement. It has changed my life so profoundly … I just can’t convey it to you.”

Because of that, Dalrymple said, he wants to help champion those who need someone to champion them. That’s something he believes he will be able to do at Columbia College.

Dalrymple said he takes serving all of the college’s constituents seriously. It is noble to serve students, from the freshman straight out of high school to the military servicemember to the working parent, he said. After working in traditional liberal arts and sciences colleges and spending the past four years as a dean at Excelsior College, an online-only institution in Albany, N.Y., Dalrymple said he wants to do everything in his power to ensure that the main campus and the adult-serving operations thrive. In fact, it’s one of the reasons he applied for the job.

“The primary appeal of Columbia College is the fact that it’s the best of both worlds as far as I’m concerned,” Dalrymple said. “It has the traditional world, which I frankly miss. I miss being in a room of 19- and 20-year-olds, some of whom will actually listen to me. At the same time, I don’t know as I’d be interested in just a traditional institution, because I wouldn’t be leveraging the things I’ve learned at Excelsior.”

When asked by a student what he would like to accomplish in his first two years as president, Dalrymple said he wants Columbia College to be part of a solution in the country. With so many different parts to it, the college understands higher education and can do more than just recognizing that there is a problem, he said. It can help the country actualize change.

“It’s difficult for me to stand up here and tell you what’s great about Columbia College,” he said about how he might make the college stand out in the community. “It’s not that I have no answers; I’ve thought deeply about it. But I think the better answer is to say that I think that’s exactly the question that we need to sit down and figure out ourselves.”

In his personal life, Dalrymple enjoys reading, writing, sports and science fiction. He has a Ph.D., a master’s degree and a bachelor’s degree in English. For his postgraduate degrees, he specialized in Mark Twain, Shakespeare and turn-of the-century American novels. His doctorate dissertation was titled “Capital Fictions: The Business Novel in America, 1880 – 1910.” Dalrymple also holds a master’s degree in business administration.

Though he was mainly a professor of business administration, his favorite course he taught was fiction writing. As dean of Excelsior College, Dalrymple encouraged the creation of English courses on zombies, and later, a course about vampires.

“If you think about zombies, there’s a literature component to it, there’s an epidemiological component to it with how diseases spread, there’s a lot of sociology content in what happens in a huge natural disaster like zombies chasing you, and you can really get into some fascinating and deep discussions about things,” he said. “Plus you get to watch ‘The Walking Dead.’”

He also writes science fiction of his own. In 2010, he received “Realms of Fantasy” magazine’s Readers Choice Award for “Queen of the Kanguellas.” The short fiction piece is set in mythical Africa and features sorcery and a tribe of fabled Kanguellas, which are led by an immortal warrior queen. He co-authored “Time Mastery,” a book on leadership published by the American Management Association in 2005. He also has published other works of fiction in “Fantasy and Science Fiction” magazine. Read the magazine’s interview with Dalrymple about those stories.

Activities outside literature and the college include watching sports, specifically the Buffalo Bills, and playing video games.

Dalrymple’s wife Dr. Tina Dalrymple has her Ph.D. in nursing with an emphasis in rural populations. She is a tenured professor at Hartwick College and a nurse practitioner in a school-based health clinic. Between the two of them, they have five grown children. Because their children are all out of the nest, Dalrymple and his wife are looking forward to immersing themselves completely in Columbia College, from faculty/student volleyball games to attending college events.

Dalrymple said the proper role of the president is to cheerlead. He will read anything a faculty member writes. He will brag about our sports teams. He will encourage students, staff, faculty and everyone to go for greater.

“Tina and I both are looking for a place to just pour ourselves into,” he said during the faculty forum. “You’re going to see us at your students’ recitals and games. If you invite me to your class, I’ll come. We like that stuff. That’s why we’re here.”