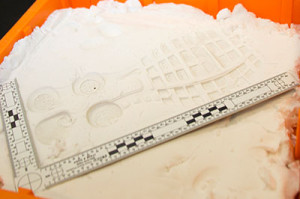 Past personal experiences can be a dominant driving force that compels a person regarding day-to-day decisions. For Samantha Macht, a cruel and gruesome incident transformed her life and led her from Minnesota to Missouri to study forensic science at Columbia College.

When Macht was in the 7th grade in Waseca, Minn., her friend Alec Kruger and his parents, Tracy and Hilary, were shot by a man named Michael Zabawa. Alec and Tracy died. Hilary survived.

This tragedy would become the driving force that influenced Macht’s future education and career decisions.

“I want to know that what I’m doing matters in the world,” Macht said. “This was so important to me growing up that I hope I can bring someone else closure.”

Zabawa claimed the shootings were accidental, but DNA evidence and witness reports by Hilary Kruger told a different tale. During a search of Zabawa’s apartment, investigators found blood-stained clothes and gloves, a pair of shoes with treads matching tracks near the Kruger’s house and a hair that was suspected to belong to one of the victims.

He was found guilty on 12 felony counts, including two first-degree murder counts, and sentenced to two consecutive life sentences. He also was sentenced to another 18 years for shooting and injuring Alec’s mother.

“When they were able to get the killer with DNA, it meant a lot to me,” Macht said. “It’s driving me. I know I’ll be happy in my career because I can bring closure to other people and it gives me a purpose.”

It was seven years ago, but Macht still speaks hesitantly about Alec. He wanted to be an actor. He was a three-sport athlete who was always cracking jokes and always smiling. “You never notice someone smiling until they’re not there to smile at you anymore,” she said slowly.

It wasn’t long after Alec’s death that Macht discovered how to redirect her grief and realized her future was in finding the truth behind vicious crimes. In the 9th grade, she began searching specifically for colleges with forensic science programs. A Google search returned Columbia College as a top result.

“I found this school, and I fell in love with it,” she said.

A trip from Minnesota to the main campus in Columbia, Mo., during her junior year only strengthened Macht’s desire to attend, and a letter the college subsequently sent thanking her for visiting confirmed it. 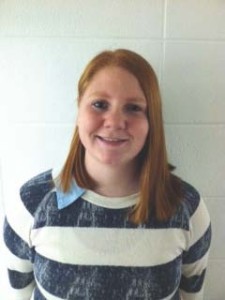 Now in her second year at Columbia College, Macht is a double major in forensic science and chemistry, with minors in biology and criminal justice. She also is working toward a crime scene investigation certificate. This semester, she is taking a 20-hour course load of calculus II, organic chemistry II, genetics, forensic anthropology, an independent study and the Emerging Leaders Institute course. She is treasurer of the Science Club, a member of the Forensic Science Student Association, a peer mentor in the science Living Learning Community, and a member of the SAC@Nite committee.

“Sammi is an excellent student, and I am excited to help connect her coursework to her future career path,” said Dr. Christopher Babayco, assistant professor of chemistry. “With her passion for the sciences, I am sure she will be successful after graduation.”

Macht is working with Babayco on a research project relating to arson investigations. She is learning how to calculate the tiniest amount of accelerant that can be left at a crime scene and still be detected. She is particularly interested in toxicology, which she currently hopes might become her career. Macht wants to work in a crime laboratory; she’s not quite sure she would want to constantly be at crime scenes.

“It’d be cool,” she said, “but it can be hard to take yourself away from the situation.” She’s not worried about seeing the bodies – she made it through viewing cadavers on a Forensic Science Student Association trip with no problem – but seeing victims, weeping parents or children might be a little too much for her to bear. During her criminal investigations and blood stain courses, listening to a section on child abuse was difficult for her and a classmate, who had experienced a recent death of a young relative.

“We were both just sitting there almost in tears trying to listen to lecture,” Macht said. “But I mean, it comes with the territory. It’s a good thing to still feel. We don’t want to lose being human.”

It’s the closure she can bring to others that compels her to continue in her chosen field. It makes it easier to study hard, she said, and it’s why she might stay up until 4 a.m. burning the midnight oil for a final. Macht sincerely loves what she does, and though it was a devastating experience, she credits Alec for helping provide the motivation to pursue her career ambitions.

“He was a great human being, and I am inspired to do better because of the man I know he would have been,” she said.