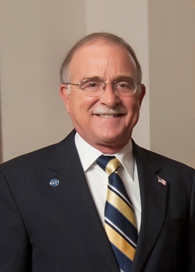 Randerson enjoyed an illustrious first career in the U.S. Air Force and a successful second career with Columbia College.

An event was held Randerson’s last day to honor him and celebrate the contributions he has made to the college for the past 18 years. As Dr. Terry Smith, interim president, said in his speech, “Mike’s a numbers guy.” So here are some of his contributions in statistics form.

But the most important number is one. And that one is Randerson.

“There is no one at the college more devoted to the college mission and its thousands of adult students than Mike Randerson,” Smith said.

Randerson told the room a story about how he came to be where he is today. In a civics class in the 8th grade, he wrote an essay on what he wanted to do with his life. He wanted his life to be about service to others, and he wanted to be an Air Force officer. He knew he would retire early, and then he planned to become a college professor.

Almost 30 years later, Randerson was traveling to visit relatives in Iowa when he and his family decided to drive through Columbia to see what the town was like. As he drove down Rogers Street, he thought to himself, “I’d like to work at a college like that someday.”

And less than two years later, he received orders from the Air Force to move to Columbia, making it possible for Randerson to pursue his two passions: service and the Air Force.

In Randerson’s first month here, Dr. Gerald Brouder, then-president, had him attend a commencement at the Redstone Arsenal campus in Alabama. Randerson said it was there that he gained the understanding that Columbia College was truly executing quality education. He thought, “This is a worthy thing to do with the rest of my working life.”

Randerson said it is a blessing to be able to say he’s been with the college for 18 years. He pointed to three constants of the college that he has enjoyed throughout his career here: the mission of providing access to education, the students who impress him, and the colleagues who inspire him.

“I can honestly say this has been the best experience of my life,” he said.

Smith appointed Dr. Gary Massey, dean for AHE, as the interim vice president for AHE effective Feb. 1. Massey will assume the role and all responsibilities previously held by Randerson as the vice president.