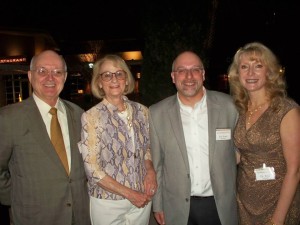 At the Jan. 22 public introduction of Dr. Scott Dalrymple, the next Columbia College president, he announced that he would visit every nationwide campus in his first year. He kicked his tour off on Feb. 18 with a trip to the Florida campuses and an alumni event in Jacksonville, Fla.

Dalrymple and his wife, Dr. Tina Dalrymple, attended a networking social at Cantina Laredo that was hosted by Bill Leeper, the Columbia College Alumni Association president, and Bill Wright, the CCAA president-elect. There, they met with alumni, friends and staff of the college, including Jacksonville Director Vanessa Swindell, academic advisors and other staff members. Anita Abbott Timmons, trustee of the college, also was in Florida for the event.

The next stop for the Dalrymples is Syracuse, N.Y., where they will attend an alumni evening social at Justin’s Tuscan Grill.

Keep an eye on Connections and the college’s social media to find out where they will be headed next!