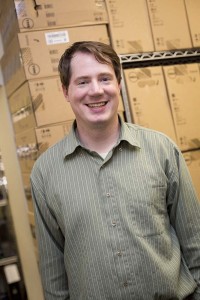 “I would like to recommend Jason Youngquist, Security Engineer. He holds a unique position on campus, which many people don’t understand and think is more of an annoyance than a help. But in essence he protects the college! Jason also has a lot of interests outside of Columbia College and has been featured in several local newspapers, as well as KOMU for his Little Free Library (he has the only official LFL in Como).”

When did you start working for Columbia College?
October 2004.

What excites you most about working here?
I work with a good group of folks in Technology Services.

What were you doing previously?
I performed system admin/desktop support for a non-profit organization at the University of Missouri.

Where are you from originally?
I grew up right here in Columbia, MO.

Who or what influenced you professionally?
Mr. Lynn Diel was a mentor who helped with the Columbia Aeronautics and Space Association (CASA) group when I was in high school. He devoted a lot of time and effort to help a handful of my high school classmates and myself learn Linux.

Tell us about your family.
I have a younger sister who is a 5th grade teacher at Lee Elementary. My father recently retired a couple years ago from the MU Veterinary Hospital where he was a large animal veterinarian and professor. My mother was a reading teacher for a handful of years before I was born and then became a professional homemaker.

What are some of your hobbies and interests?
Reading, biking, crypto currency mining, working on my house, canoeing and camping.

Favorite type of music?
Mostly anything except country.

Tell us something about yourself not many people know.
I’m a junior high and high school mentor for a CyberPatriot team here in Columbia. The goal is to teach young people how to secure computers.