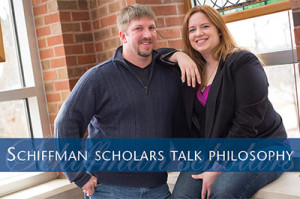 Ryan and Charisse Smith had just finished an awkward dinner. It was their first date, and it wasn’t going as they’d hoped. They parked the car and stopped to talk for a bit.

“Then we got into religion and politics and felt comfortable!” Charisse said.

“That should have told us we were destined for philosophy to start with,” Ryan added.

Their three-hour conversation led to a second date, and a third. By the third, Charisse told her mom she was going to be engaged within the year. Ryan’s brother asked him, “She’s the one, isn’t she?”

Ryan and Charisse were married on Dec. 18, 2004. As they near their 10th anniversary, philosophy continues to play an integral role in their lives – how they spend their free time, how they interact and how they raise their children. They pause movies to talk about the underlying themes. If they argue, they acknowledge each other’s viewpoint, but politely say they see it differently. A certain philosophical idea, though, especially influences their lives and the way they raise Levi, 11; Raevynn, 6; and Wyatt, 5.

“And definitely not the way they have to be,” Charisse added.

Ryan, because of his love of ethical and philosophical discussion, and because he is a Schiffman Scholar, will have an opportunity to talk about ethics on a panel featuring Nina Totenberg Wednesday, March 12. Totenberg, National Public Radio’s award-winning legal affairs correspondent, reports regularly on NPR’s critically acclaimed newsmagazines, All Things Considered, Morning Edition and Weekend Edition. She has covered the Supreme Court for nearly 40 years often covering controversial topics, something Ryan said is central to philosophy. “Philosophy is embroiled in constant controversy over what is right.”

“The scholarship really changed my life,” said Charisse, who originally was studying to be a middle school science teacher. “I never even considered philosophy as a major. But because I was required to take an ethics course, it showed me what I was capable of doing and gave me something that I’m very, very proud of. I was able to test my limits intellectually, which I have never been able to do before.”

Schiffman Scholars often attend events and act as stewards for the philosophy program.

Ryan, who taught at small high schools in the mid-Missouri area for 11 years before returning for his second degree, meets with people who come to speak at the college. At last year’s Schiffman Ethics in Society Lecture, he met Mary Robinson, the former president of Ireland, and was impressed with how she treated him as an equal. Next on his list is participating in a Q&A panel with Nina Totenberg, this year’s Schiffman Ethics speaker.

Most recently, Totenberg covered rulings on voting rights, affirmative action and same-sex marriage. She also reported some on the Citizens United decision, which ruled that the First Amendment prohibits the government from restricting political independent expenditures by corporations, associations, or labor unions.

“I can’t find much of an ethical argument to support the decision,” Ryan said. “I’ve found a lot of legal arguments in support of it. But it’s just something I think has an enormous ethical impact on society.”

In fact, that kind of impact is exactly what Totenberg will be talking about at her lecture on March 12. Titled “The Supreme Court and Its Impact on You,” the lecture will take place at 7:30 p.m. in Launer Auditorium.

Ryan and Charisse said the Schiffman lectures are an important part of the Columbia College community. As someone from a small town attending a private college, it can often feel like the world is so big and far away.

“But then you get to meet these people who have an impact on the world, and it diminishes that distance and makes it feel like I might not be them, but I can make a ripple somewhere,” Ryan said. “I can have some kind of impact. To me, that’s the beauty of bringing people here where you can have that more intimate setting and see them as human beings, not just as idols from a distance.”

“There isn’t a lot of work done in philosophy on how that phenomena works,” Ryan said. “Why are you attracted to people and how does that work? Is it simply biological? Our experience is there’s something else at work. It defies explanation.”