Winter 2013-14 student employees of the month

It’s been a few months since we highlighted some of the students who make our faculty and staff able to do what they do. Here’s some of the recent student employees of the month. 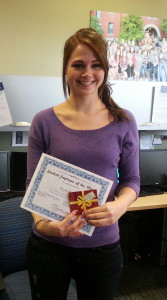 November 2013 — Kayla Boss
Congratulations to Kayla for her hard work and dedication to the Student Success Center. Kayla has worked with the center since August 2010.

She was nominated by her supervisor, Kirk Wallace. Wallace said it’s rare to find students like Kayla who are willing to serve at a higher level because of the needs of the Student Success Office and Columbia College. She is an outstanding role model and plays a key part in ensuring the retention ambassadors show the proper respect and civility while providing great customer service to students and guests who visit them throughout the day.

Kayla has raised the attitude and enthusiasm to the point that everyone enjoys coming to work. She has just been accepted to Washington University in St. Louis for her master’s degree in social work, which is a testimony of her hard work at Columbia College.

“The Student Success Office is blessed to have Kayla as a senior student worker and retention ambassador, and she is continually making a significant difference at Columbia College,” Wallace said. 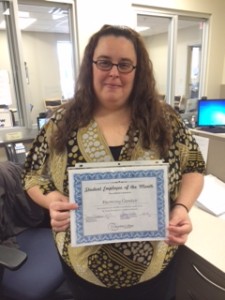 Harmony is humble, helpful, respectful, courteous, joyful, pleasant and optimistic. She joined the St. Louis campus in September and immediately began making an impact with her work ethic and enthusiasm. Her skills in customer service are impressive. She makes every student with whom she works feel that she is there solely for them and to help take care of their situation.

The St. Louis staff is thrilled to have her as part of the staff. One staff member summed it up: “She’s incredibly bright, professional and courteous. We love having Harmony with us!” 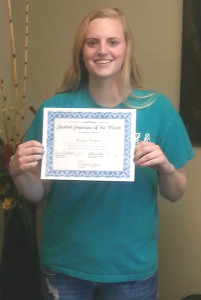 January 2014 — Megan Nilson
Megan has been a part of Human Resources since May 2012. Her major is Human Resources, and she felt she could gain experience in the field. The department said they’ve been lucky to have her as part of the team.

Having Megan for the summer proved to be very valuable for Human Resources, so much so that they asked Megan if she would consider staying on. Since then, she has been a huge asset to the office. She handled almost every aspect of the student employment program for the assistant director, who was out of the office. This was a great challenge to take on with the small amount of guidance and training Megan had received. Human Resources supervisors have heard great feedback in her time in this role. She is great with all customers she serves, and assists with many areas of Human Resources.

Human Resources wrote, “She has grown so much personally and professionally while working in the HR office. She is a true example of the mission of student employment. Congratulations, Megan!”