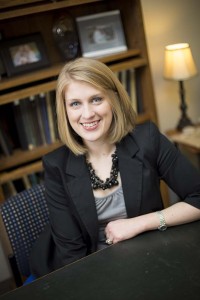 Ember Davis is the assistant director of Events, Protocol & Design. Stephanie Johnson, interim director of Admissions, recommended Davis be featured in Connections. Here’s what Johnson had to say:

“I would highly recommend a feature on Ember Davis! She’s a fantastic asset to Columbia College and has also been involved and recognized in the community. She would be a great focus.”

When did you start working for Columbia College?
I started working as an events coordinator at Columbia College in August 2011 when I relocated to Columbia. My first day here, we had an event on campus, which was, of course, the perfect introduction.

What excites you most about working here?

Where are you from originally?
I was raised in Dallas, Texas. Everything really is bigger there — chiefly restaurant portions. My sunny hometown has made the transition to Missouri winters very difficult, as I’m sure many have heard me shout mention on my walk from the parking lot. I am comforted by the fact that driving in Columbia is somewhat less stressful than any DFW Metroplex commute.

Who or what influenced you professionally?
My college involvement in extracurricular organizations and volunteering for nonprofits got me interested in special events and nonprofit organizations. I also think having an extremely positive collegiate experience gave me the desire to continue to work in higher education in hopes of enriching the experience for others, however indirectly.

Tell us about your family.
My parents recently moved to Alpine, Texas, which has the highest altitude in the state. It sounds very scenic, though I’ve never been, and it will be where they will semi-retire. My dad operates a literal one-man show as a family practice physician serving mostly Spanish-speaking patients (he’s fluent). My mother has been a lifelong teacher of many areas, including elementary classroom, K-8 art, librarian and mom. She earned two master’s degrees (Art Education and a MLS) while working full-time and with children, which has inspired me to earn my MBA while I work full-time. I’m honestly not sure how she did it. My sister is a sophomore at NYU-Abu Dhabi. She was valedictorian of her high school class and is amazing at everything, like attending college so far away from home. She has better taste than I do, so I often earn “hand-me-up” shoes and accessories.

My husband is a Ph.D. student at the University of Missouri in political science. His area is American politics. He’s also amazing at everything and loves to eat in Dulany for lunch. His parents live in Little Rock and are the best in-laws ever. We have two cats named Ethel and Seamus. Seamus is also a girl, but when we named her, we weren’t aware of that fact.

What are some of your hobbies and interests?
My hobbies include creating and collecting art, gardening, camping, garage sale-ing, making bad puns, spending time with my husband and cats, Netflix, calling the Hogs and traveling to visit with both of our families.

Favorite book and/or author?
“To Kill a Mockingbird.” My dad reminds me of Atticus Finch. He has received payment in the form of tamales, which is so much better than a sack of potatoes.

Favorite type of music?
I have a lot of favorites! I alternate between Pandora radio stations named for Alison Krauss, Ray Charles, MGMT, Episcopal Hymns and Southern Hip Hop.

Favorite sports team?
If it’s not the Cougars, of course I root for the University of Arkansas Razorbacks (I’m a two-time graduate). If the Hogs aren’t playing, I will root for the SEC team, especially MU and Georgia. If there’s no SEC team, I’ll root for the underdog, but not for Texas or Ohio State. No reason.

Tell us something about yourself not many people know.
I make a mean decorated Christmas or Easter cookie. Stop by the office after Easter to see if any are left!