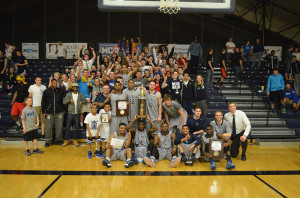 The Columbia College basketball teams played hard through their regular season into the postseason, with both teams making it to the National Association of Intercollegiate Athletics (NAIA) Tournament. The No. 4-seeded men’s team made it to the second round before losing to MidAmerica Nazarene (Kan.) University, and the No. 3-seeded women’s team lost in the first round to Montana-State Northern.

Many players received postseason awards, and we are proud of all the players for getting so far!

After clinching the American Midwest Conference regular season championship for the third consecutive year, the men’s basketball team headed to the AMC Tournament. The team was victorious in the AMC championship tournament finals, defeating Freed-Hardeman for the title.

The men’s basketball team began the NAIA Tournament in Kansas City with a first-round victory against Belhaven from Jackson, Miss., marking 16 straight wins for the Cougars. In the second round, Columbia College took on MidAmerica Nazarene from Olathe, Kan., but lost 80-75.

AMC Postseason awards included the naming of Devin Griffin to the first team, Derrick Dilworth to the second team, and Patric Massey and Chantel Stanciel to the honorable mention squad. Griffin also was named the Co-AMC Player of the Year, along with a member of the Freed-Hardeman team. Coach Bob Burchard was honored as the Co-Coach of the Year, the ninth time he has received the honor. NAIA postseason awards included Griffin named a First Team All-American, and Zack Rockers and Tanner Sutton named to the Daktronics-NAIA Division I Men’s Basketball Scholar-Athlete Team. 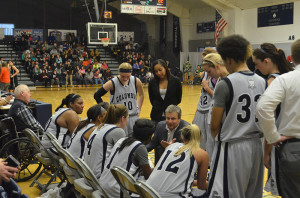 The women’s basketball team defeated Lyon College in the AMC semifinals and played Freed-Hardeman in the conference title game. The women’s team lost in the championship game, but had already clinched an NAIA Tournament bid thanks to a second-place regular season finish.