A spirit of strength 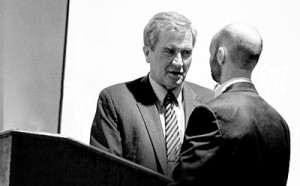 The alumni awards committee had been talking for several years about creating an award to recognize those who had overcome obstacles to graduate college, but when Bill Wright met Christopher Aquilina at the Columbia College-Jacksonville commencement, he knew it was time to finally actualize the award.

Wright, president-elect of the Columbia College Alumni Association, provided the alumni charge at the Jacksonville campus’s 2013 commencement. There, he spoke with Galya Taborn, a human services instructor who walked with Aquilina across the stage.

“It seemed like the right place, right person, and I realized this is a great time for us to do this,” Wright said. “It’s the kind of award that when you see someone who displays those characteristics, you know.”

The newly created award honors one of Columbia College’s most esteemed alumnae, singer and actress Jane Froman ’26. Froman sustained extensive injuries in a plane crash while traveling with the USO in 1943. Despite her injuries, she continued to perform with the USO. Froman died in 1980 at age 72. The Courage Award is granted by the Columbia College Alumni Association to an alumna or alumnus who demonstrated perseverance to overcome personal obstacles while continuing to better him- or herself personally or professionally.

“With her story and everything she represents for the college, it is fitting that the award is named for her, and we’re very proud of that,” Wright said.

At the alumni Reunion Weekend, the CCAA presented the Jane Froman Courage Award to Aquilina for displaying a spirit of courage in life. Aquilina, who suffered a gunshot wound to his face and head, is legally blind. Despite this challenge, he dedicated himself to his educational goals and persevered. He completed a bachelor’s degree in general studies with a 4.0 GPA and attended commencement in August 2013.

“This hard work paid off when I was able to cross the stage at commencement with my father and a family friend in the audience,” Aquilina said. “It was one of the proudest moments of my life.”

Following commencement, Aquilina was nominated for the Jane Froman Courage award by Taborn. “I’m amazed at the courage and resilience Christopher possesses, but I’ve seen his strength from the first time I met him,” she said. “His motivation and enthusiasm are never-ending in the face of adversity.”

Wright echoed Talborn’s sentiments on Aquilina’s strength and said the Jane Froman Courage Award is a great addition to the other alumni awards that are given out annually. He said the alumni awards committee has always done a great job naming all the winners, but it was especially excellent this year.

“Christopher embodies the spirit of the award more than anyone that I’ve seen so far,” Wright said. “Go for greater isn’t just a slogan with him. You see in him the living persona of the spirit that Columbia College puts out there.”

Aquilina now is pursuing a master’s degree in public administration at Strayer University and plans to complete a doctorate degree in political science or philosophy someday. He said his experience at Columbia College prepared him for an advanced degree, and he said college and his professors made him work harder than he thought possible.

“The lesson that I have taken away from all of these experiences is that you must keep moving forward if you want to survive,” Aquilina said. “Even though I am blind, I can now see more clearly than ever before. College has opened a whole new world for me, and it has taught me the true meaning of equality.”

Read “Honoring our alumni” to learn about the other alumni award winners who were celebrated for outstanding leadership, success and service.