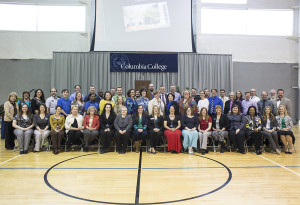 Each year, Columbia College holds an employee appreciation luncheon to celebrate and recognize its faculty and staff members for their dedication and commitment to the college.

As more than 550 people sat down to eat, various announcements were made. Here’s a few numbers from the luncheon:

Employees were recognized for 5, 10, 15, 20, 25 and 30-year service awards. Though there are far too many to honor in this article, each person was celebrated in the luncheon program, and those in attendance were congratulated on stage. Sally Wells, assistant professor of business administration, received a standing ovation for her 30 years at the college. The 30-year service awardees not in attendance are Terry Allen from the Online Campus; Robert Biswanger from the Hancock Field, NY, campus; Dennis Dunkin from the Denver, CO, campus; and Walter Swartz from the Online Campus.

As the luncheon progressed, speakers announced the winners of other awards.

Stephanie Johnson, interim director of the admissions department, received an award for suggesting the first LEAN initiative idea that led to a successful workout and improved college processes.

Scott Gasparik and Jay Bell, both in general maintenance, received the Harold E. Nichols Plant and Facilities Employee of the Year award, which recognizes maintenance employees who exemplify the qualities of Nichols, who died unexpectedly eight years ago.

Congratulations to the award winners and all Columbia College faculty and staff members for their hard work and contributions to the college over the years.