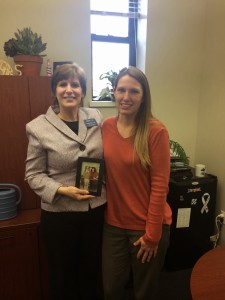 Evening Campus student Christina Bruce was named one of the recipients of the Frank S. Westling Scholarship for the 2014-15 academic year. Christina, a Higbee, Missouri, resident, wife and mother of two, is pursuing her Bachelor of Science in Human Services with a minor is sociology.

To qualify for the Westling award, students must be an Online, Evening or Nationwide Campus student pursuing a bachelor’s degree with Columbia College; have attended Columbia College during the 2013-14 academic year; have a minimum GPA of 3.0; have completed at least 15 credit hours with Columbia College; provide evidence of leadership and service to their community, school or country; and write a 400-500-word essay about their achievements and career goals.

Each year Columbia College awards this $500 scholarship to as many as 35 students in honor Westling, a highly decorated infantry officer and former dean of the college’s Extended Studies Division, now Adult Higher Education. Before joining the college, Westling served in the U.S. Army for 31 years, fighting in World War II, Korea and Vietnam. He was awarded the Purple Heart, Bronze Star and Silver Star medals and earned parachutist and glider badges. During the Vietnam War, he commanded the Army’s 4th Psychological Operations Group in Saigon and retired as colonel.