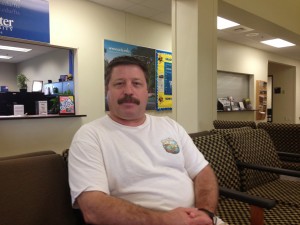 James Krupp is proud to call himself a Columbia College Cougar, but could he soon be referred to as a University of Southern California Trojan? For the next six weeks, James anxiously will be awaiting a graduate school acceptance letter from USC.

Krupp completed his undergraduate coursework in December 2013 when he received his Bachelor of General Studies along with a management minor. Spending 26 years in the military peaked his interested in working with the Department of Veterans Affairs. Now retired, James has found a Master of Social Work program at USC that caters to individuals who wish to work with veterans.

James decided to come to Columbia College because of our convenient location, and he liked the idea of staying connected with the military.

James truly enjoyed his time with Columbia College-Fort Stewart. He believes staying connected with his academic advisor and Dr. Stumpf was the key to successful completion of his degree. When asked what advice he would give to current/future students, James responded, “Get on a specific degree path and just start to plug away.”