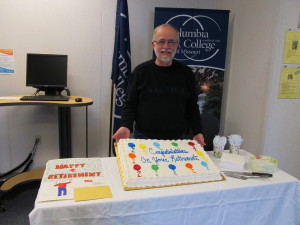 Four long-time instructors of Columbia College are retiring, and the college prepares to say goodbye to Robert Biswanger of the Hancock Field, NY, campus, Dr. Ken Middleton of the Day Campus, and Dr. Faye Braithwaite and James Foster of the Redstone Arsenal, AL, campus.

Robert Biswanger began teaching his first course, Mathematics in Modern Society, in January 1984. For the past 30 years, he has taught a variety of math courses, recently including beginning algebra and intermediate algebra at Columbia College-Hancock Field. He announced his retirement in the January 2014 semester.

Dr. Ken Middleton, associate professor of business administration, began teaching at the college in 1998 and served as department chair from 2000 to 2011. His achievements over the past 16 years include the launch and expansion of Sigma Beta Delta to the Adult Higher Education division and two successful departmental program reviews.

Dr. Faye Brathwaite has worked as an adjunct instructor for Columbia College-Redstone Arsenal since 1996. Although retiring from 18 years of adjunct teaching, Brathwaite remains an associate professor and chair of the accounting department for Oakwood University.

James Foster has served as a Columbia College-Redstone Arsenal adjunct instructor since 1983. While teaching for Columbia College for the past 31 years, he served as chief of education and training and team leader for the Human Resource Management Division of the U.S. Army Aviation Command.

The students, faculty and staff at Columbia College wish them all well in their next chapters.