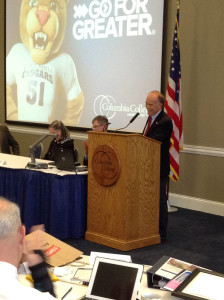 At the last Adult Higher Education directors’ conference in September 2013, Columbia College announced it would endow a scholarship in honor of Col. Mike Randerson, the retiring vice president for AHE. Half a year later at the AHE directors’ conference in April, the college announced that the first recipient of the Col. Mike Randerson Scholarship had been selected.

The recipient will be announced May 22 at Military Recognition Day.

It took only 43 days to fully endow the scholarship, said Mary McCleary Posner, who chaired the fundraising effort. She joked that she sent a letter about it to 900 of her closest friends.

“A big thank you,” Posner said. “Thank you for letting me do this for Col. Randerson.”

Currently, the Tradition Meets Tomorrow Campaign has raised more than $1.9 million for Adult Higher Education. That success is greatly due to Randerson, said Mike Kateman, executive director of Development, Alumni and Public Relations.

Randerson whispered “wow” as Dr. Terry Smith, interim president, said the scholarship is currently endowed at $267,789, which includes an anonymous estate gift of $250,000. Smith thanked Randerson for his commitment to the college that inspires so many to give.

As Randerson took the podium, returning to the college after his Jan. 31 retirement, he talked about how great it was to be back and how taken aback he is at the results Posner got so quickly. “I wouldn’t have dreamed it would be where it is today,” he said.

He again talked about how he was reluctant to have a scholarship named for him, but Posner convinced him to let himself be an instrument for good. In this case, the good is doing whatever we can to help military students.

“It’s always going to be important,” he said. “And it will be even more important in the years to come. I see this as an opportunity that charitable people have taken to give to a tremendously worthy cause.”