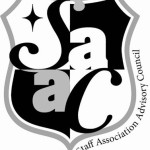 Last year, Administrative Council was asked to implement economies by not having any expenditures on things that were nice to have, but not needed. Smith said that with that task in mind, college employees economized $1 million. Smith thanked everyone for having ideas on how to get by with less. “That $1 million is money that can go to good use in the future,” he said.

Each year, the Customer Service Committee does a drawing to send two main campus staff members to Nationwide Campus commencements. But this year, the committee decided to do something a little different. Under the proposal of Robert Klick, academic advisor for the Online Campus, the committee reversed the drawing and chose two staff members from Nationwide Campuses to attend the main campus commencement. Melanie Reynolds from the Hunter Army Airfield campus and Darrin Bartunek from the Salt Lake City campus will be in Columbia, Mo., for commencement.