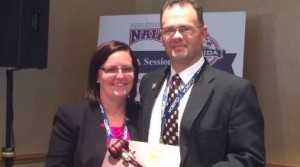 Cindy Potter, associate director of Athletics, is the new president of the NAIA Sports Information Directors of America (NAIA-SIDA). Potter focuses on media relations and compliance in athletics for the college and has previously served on the NAIA-SIDA board. She will serve a three-year term, replacing Jay Stancil, who is the sports information director for Union College in Kentucky.

Potter, who graduated from Columbia College with both her bachelor’s and master’s degrees, is a member of CoSIDA, College Sports Information Directors of America and was appointed to the national board of directors in 2011. In 2008, Potter received the College Division Rising Star award for her dedication to the profession. She is a member of the College Division Management Advisory Committee for CoSIDA and serves on various committees for both CoSIDA and NAIA-SIDA.

Potter became Columbia College’s first associate athletic director in the summer of 2011 and directly oversees the softball, volleyball and cross country/distance track teams as well as the athletic training program. She was named the assistant director of athletics/media relations and compliance in 2007 after holding the title of coordinator of athletic information and compliance.