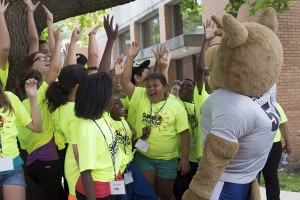 False analogies and logical fallacies might not be the first topics that spring to mind on how to hold a sixth grader’s attention, especially on a summer day.

Yet Melanie Johnson-Moxley, instructor of philosophy at Columbia College, had a group of sixth grade students clamoring to weigh in during a discussion on philosophical concepts, and how these concepts could be applied to their daily lives. Johnson-Moxley’s discussion was part of the Summer Expeditions program, which is a partnership with Columbia Public Schools that offers college activities to local fifth- through seventh-grade students. This is the fourth year the college has hosted the program.

During the program, students enjoyed different educational activities, ranging from music and visual arts to the sciences, all of which were taught by the college’s faculty. The students also treated Columbia College faculty and staff to a “flash mob” dance on Friday. The weeklong program culminated with a graduation ceremony, where Dr. Terry Smith, executive vice president and dean for Academic Affairs, addressed the students in full academic regalia.

This year’s graduation ceremony drew interest from local media outlets, as KMIZ, Columbia’s ABC affiliate, and the Columbia Missourian were on hand to capture the excitement. At the ceremony, Smith reiterated his commitment to providing students who completed three years of Summer Expeditions and finished school in good standing with a “substantial” scholarship if they decided to attend Columbia College. At the ceremony, the college also announced that it had a received a grant from State Farm Insurance for more than $16,000, which will help fund the program. Looking toward the future, the college hopes to deepen course offerings and reach more students.