Louise Phipps named as Lemoore Instructor of the Year 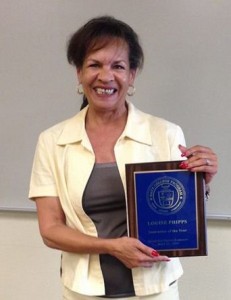 Louise Phipps was honored this year as the NAS Lemoore Navy College Program Instructor of the Year for 2014.  She has been teaching at Columbia College-Lemoore since March 2009.

Phipps teaches Introduction to Speech, and every term she teaches, she starts with students who are terrified and would rather do anything in the world than stand up and speak in front of the group. But it’s a requirement, and many students have come through Phipps’ classes not only having survived the class, but also having enjoyed it. Her evaluations prove it. Some of the comments that the students submit include:

The Lemoore campus offers heartfelt congratulations to Phipps for her recognition as the 2014 Navy College Program Instructor of the Year.

“We are proud to have her on our faculty,” said Betsy Quade, director of the Lemoore campus, “and we look forward to many more years of seeing students become accomplished public speakers under her watchful eye!”