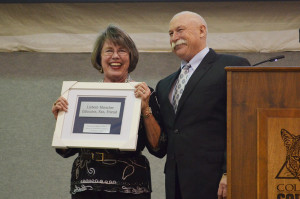 Lizbeth Metscher, instructor of English and program assistant for English for Speakers of Other Languages, has retired after 38 years at the college. To celebrate her years of service to the college and, specifically, service to the athletics department, a seat was dedicated in her honor in Southwell Complex.

“When I got the seat named for me I thought that was truly one of the sweetest things that has ever happened to me or to a person,” Metscher said. “The seat was for being an educator, fan and friend, and I thought calling me a friend was the loveliest sentiment in addition to the others.”

She began working at the college when she was 27, teaching as an adjunct instructor in the evening. She said she runs into former students outside of the school and can remember where they sat and what kind of papers they wrote. “It’s been pretty astounding,” she said. “Teaching is always the same, but it’s never the same.”

Metscher was the faculty athletic representative for many years, acting as an intermediary between the faculty and the athletics department. If there were any signs of ineligibility, she was involved in the process.

“She had a number of connections with the athletes,” said Drew Grzella, assistant director for operations and development of Athletics. “To name a seat after her was a very simple thank you. It’s a nice memory of how much she has helped us.”

A plaque was placed on a seat behind the home bench, and Metscher was presented with a framed plaque at the Celebration of Excellence banquet hosted by Athletics. More than 300 people, including student athletes and their supporters, were at the dinner. The honor came as a surprise to Metscher, but the athletics department believed she needed a public thank you — and the standing ovation that came along with it.

“I’ve gone to games for years, and I’m still learning the rules of athletics,” Metscher said. “I have known and liked so many of the players and the coaches … Goodness gracious. I am lucky to have been at the college for 38 years.”