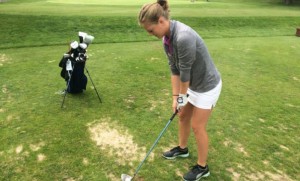 Avery Rochester, a sophomore from Marquette, Michigan, and member of the golf team, played in the Island Resort Championship. Though she struggled a bit with putting, Rochester said she will take some great lessons away from playing in the tournament, which had professional golfers from six continents.

The local television station in the Upper Peninsula of Michigan covered Rochester’s journey through the tournament. Read more with the following links: