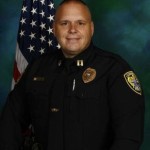 Courtesy of the Daily Commercial

Police Capt. Rob Hicks will be the Leesburg Police Department’s next police chief. Hicks, who was an adjunct professor of criminal justice administration at Columbia College-Orlando, will become the 12th police chief in the department’s nearly century-long history. Hicks has 23 years of police service, and he will take over as police chief on Aug. 21.