An update on Columbia College’s sports teams and athletes 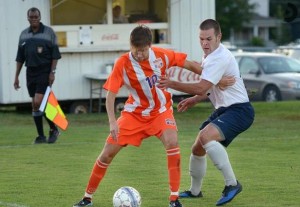 The Columbia Missourian and the Columbia Daily Tribune have been consistently covering Columbia College’s sports teams. Read on to find out what’s going on and how each team is doing.

After two losses to open the season, the men’s soccer team celebrated its first victory Saturday night against Missouri Valley College. Both goals came from senior forward Marko Paunovic, who is playing again after a season-ending knee injury last year. The women’s team is still looking for a win.

Morgan Brandt, a senior at Fatima High School in Westphalia, Missouri, has signed a letter of intent to join the Columbia College women’s basketball team. It is the team’s first commitment of the 2015 class.

Lindsey Martin, a junior who was just selected as last week’s American Midwest Conference women’s runner, was profiled in a local Columbia newspaper. She talks about her goals at the college, her relationship with Coach Tim Cornell and the upcoming season.

The men’s golf team finished ninth in the Missouri Intercollegiate Tournament last week. The team had a slow start, then the event was cut short because of rain. But Coach John Utley says he’s proud of the way the team bounced back.

The volleyball team continued their strong start to the season. Beating Evangel University 3-0, the team then enjoyed a week break to recover from the fatigue of a busy schedule. Their next match is tomorrow.