Athletic Hall of Fame Class of 2014 to be inducted 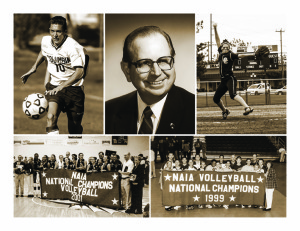 During Katie McMahon Smith’s career, the softball team made national tournament appearances in three of her four seasons. Smith has been named All-Conference, Academic All-Conference, First Team All-Region, Conference Pitcher of the Year and Region Pitcher of the Year. After receiving her degree and while working on her MBA, Smith worked as the Cougar graduate assistant softball coach and pitching coach.

In 2000, J.P. Irrera, a native of Buenos Aires, Argentina, accepted an invitation to play soccer at Columbia College. Each season, he was named American Midwest Conference and Region V First Team. Irrera received the AMC Player of the Year in 2003 and Region V Player of the Year in 2004, where he helped his team qualify for the NAIA National Tournament for the first time in college history.

Dr. Donald B. Ruthenberg moved Columbia College Athletics into a realm far beyond its stature at the time. Ruthenberg was an avid fan of all sports, attending most home contests and remaining a friend to our student athletes. He added softball and golf to the college, reinstated men’s soccer and oversaw the construction of Southwell Gym, the Cougar Softball Field and R. Marvin Owens Soccer Field.

The volleyball team took the 1999 season by storm, capturing the NAIA National Championship for the second time in two years. The Cougars completed the back-to-back national championships with an undefeated 40-0 record, overwhelming their opponents throughout the season. Coaches Wayne and Susan Kreklow were named Conference, Region and National Tournament Coaches of the Year.

The 2001 volleyball team was the third in Cougar Athletics history to win an NAIA National Championship. The team finished the season with a perfect 38-0 record while avenging their second-place finish at the national contest the previous year. At the helm was Coach Melinda Wrye-Washington, who was named Conference, Region and National Coach of the Year.

A ceremony will take place in Dulany Banquet Hall on the main campus. Read the inductees’ full bios on the Athletics website.