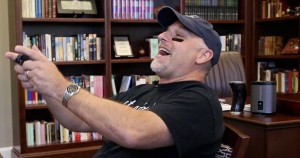 As part of Columbia College President Dr. Scott Dalrymple’s inauguration festivities, the college will host a fierce, no-holds-barred video game challenge, featuring Madden 15*. The winner will advance to a championship bout with the president, a formidable gamer in his own right.

If a student manages to pull off an upset for the ages, Dalrymple will buy their textbooks for an entire academic year.

Word of this rousing spectacle has made its way to all parts of the globe, including write-ups and Skype interviews in Fox News, Yahoo! News, Sports Illustrated, The Huffington Post, The Bleacher Report, USA Today, Fox Sports, Yahoo! Sports and AdWeek.

So bring it, students – the world is watching.

*UPDATE: Since Dr. Scott Dalrymple announced his video game challenge, it was announced that EA Sports, the company that created the Madden game series, supports the college’s event. They donated copies of Madden 15, which is the newest version of the game. MaMa Rosa’s, a refrigerated pizza company, has also signed on to give the winner a year’s worth of free pizza and the runner up six months’ worth. So, seriously… bring your A-game.