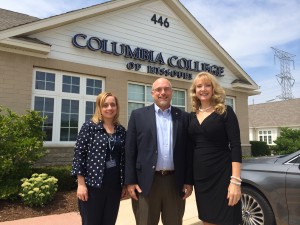 Columbia College President and First Lady Scott and Tina Dalrymple did their best to recreate the John Candy and Steve Martin classic movie Planes, Trains and Automobiles during the week of August 4-8 as they visited four of the college campuses in Illinois in a five day stretch!

Scott and Tina went by plane and automobile (leaving out the train) on their trip to the suburbs of Chicago. They traveled more than 1,000 miles during the trip and met more than 250 alumni, faculty, staff and friends of the college, sampling true Chicago classic food like deep dish pizza and Italian beef.

After this multi-modal trip, the Dalrymples have visited 10 campuses during the official Presidential Tour the couple envisioned when they made the commitment to see every campus in one year.

The Dalrymples visited campuses in Freeport, Elgin, Crystal Lake and Lake County, where they had the opportunity to tour each campus and spend time with all staff members who helped explain what makes each campus unique. 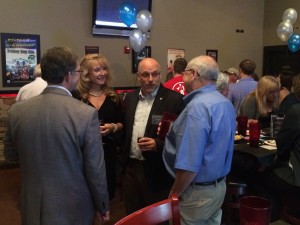 of the many highlights of the tour was a Wednesday night Columbia College Alumni Association Summer Social (photo gallery) at Fire Bar and Grill in Crystal Lake. Scott and Tina greeted more than 90 guests from around the Chicago area to the event that featured a night of great networking, stories and outstanding food.

The official t-shirt of the tour was also unveiled and distributed for the first time during the Illinois stops. The collector items were a big hit and were very well received by all in attendance. They will be distributed to everyone at upcoming events throughout the tour.

The whirlwind tour wrapped up with a very special occasion as the Lake County campus in Gurnee celebrated its 40th Anniversary. A great crowd turned out for the Thursday afternoon event that featured greetings from campus director Lyndon Russell, and remarks from Dr. Scott Dalrymple, faculty member Jane Pickens and Lake County campus alumna Melinda Meyers. The Lake County campus was the third campus launched by Columbia College in 1974 and served more than 1,200 area students in 2013-2014.

The next stops on the tour are a stop in Denver on Sept. 9 followed by a trip to Salt Lake City, Utah on Sept. 11. Both stops will include alumni events so be sure and RSVP at www.columbiacollegealumni.org/rsvp. To check out the full tour schedule, visit https://connected.ccis.edu/2014/07/scott-tina-dalrymples-presidential-tour/.