Athletics roundup: A mother and daughter use volleyball to bond

Here’s a roundup of stories written about the Cougar Athletics teams last week. 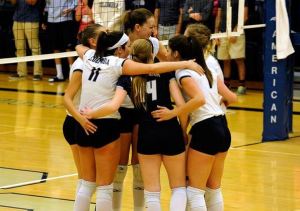 A story on Sarah Schwentker, senior libero on the Cougars volleyball team, and her mother was published in the Columbia Missourian. The story focuses on how, despite illnesses, volleyball has brought the mother and daughter closer together.

The No. 13-ranked team went undefeated in the Boneyard Brawl with wins against four teams.

The women’s soccer team is 9-5-1 with a recent win against Hannibal-LaGrange and a loss against Park University. They’re still moving forward to possible winning the American Midwest Conference title. The men’s team, though having also celebrated a win against Hannibal-LaGrange, has effectively lost its chance to secure the regular season AMC title because of a loss last week at Lyon College.